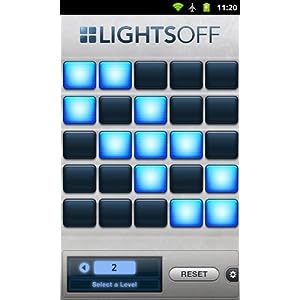 Today’s Amazon Free App of the Day is Lights Off, a touchscreen version of a logic puzzle many may have played as a handheld, Tiger Electronics game in their youth.

The premise is simple: try to turn off all the lighted buttons, so the screen is entirely filled with dark buttons. The catch is, each time you tap a button to turn it off or on, the surrounding buttons toggle on or off, too. The trick is to plan for those toggles, and tap the buttons in the right order so everything will end up turned off.

I put this game on my Kindle Fire. Touching one button toggles the four adjacent buttons (on or off). It is a puzzle game, but there are no hints. There are no controls. Just the game.

The button size is nice on my KF. The tool Icon takes you to a ‘How to play’ screen, which just says “touch a button” Game play will pretty much teach you all you need to know in the first 5 puzzles, after that, it gets less obvious.

As a translation of a classic into a modern app this one was spot on. It is exactly like the game I played as a child, right down to the lights chasing themselves around the edge when you get it right. 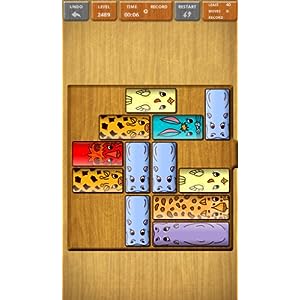 Puzzle fans might also want to check out UnblockIt, Kindle Fire Edition, currently priced at 99 cents. This ‘slide the blocks to remove a trapped piece’ puzzle has an average rating of 4/5 stars across 23 reviews.

Keep your eye trained on the red block and get ready to UnblockIt! This puzzle game is based on a simple concept: get the red block out of the board. But, of course, there’s a challenge! Move the blocks surrounding it to make a clear path, but vertical blocks can only move up and down and horizontal ones can only move side to side, making for some tight situations. The timer is on, so work deftly, as not only your time, but the number of moves needed to release the red block are also counted. Customize your game with four levels of gameplay, six block themes, and two backgrounds.

If you like logic puzzles and casual games—especially when they cost a dollar or less!—, give UnblockIt, Kindle Fire Edition and Lights Off a try!