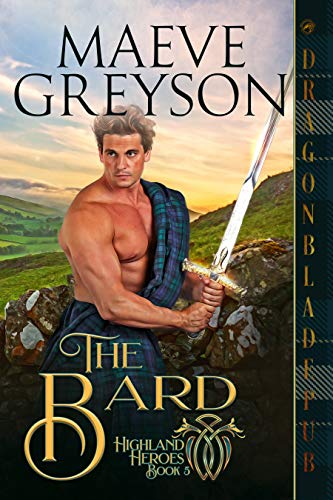 Sutherland MacCoinnich flirts his way into the hardest hearts and most forbidden beds. He’s such a charmer, even the lasses that he loves then leaves behind never hold any ill will against him. All the ladies adore him. All except one. As lovely as she is infuriating, the daughter of Chieftain Greyloch barely gives him a passing glance. When she does, it’s only to tell him he smells more like a horse than a Highlander. She even threatens to shoot him if he ever sets foot on her land again. And to add insult to injury, the woman cost him a keg of fine whisky in a bet.

An enticing trinity of beauty, wit, and fire. She would be his. Forever.

If Sorcha Greyloch doesn’t marry soon, she’s sure to be the death of her father. Many a desirable suitor has come calling, but she has refused them all. She knows who she wants. She’s loved Sutherland MacCoinnich since the first time he darkened her clan’s door. But she’s not about to tell him that until she has him on his knees. After all, most men share a particular trait. They’re driven to possess what they think they can’t possibly have.

The womanizer of Clan MacCoinnich is about to be tamed by the one woman he feared he would never win, but unexpected danger lurks in Castle Greyloch. A danger that threatens the dueling lovers’ future.

**If you love stirring tales of braw Highland warriors and the wily women who tame them, then this is the perfect novel for you! Passion, intrigue, and romance abound in this next installment of the Highland Heroes Series from bestselling author Maeve Greyson.