These Times of Abandon: A Post-Apocalyptic EMP Survivor Thriller (The Abandon Series Book 1) 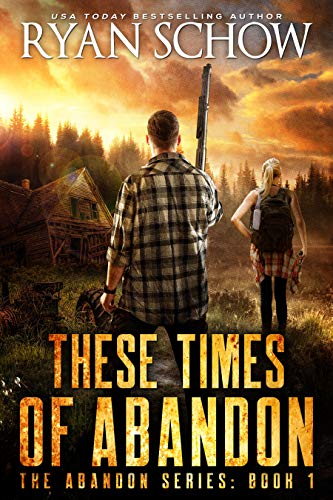 – Learn More
Text-to-Speech and Lending: Enabled
Enjoy Ryan Schow Books? Tell us why and WIN a chance for a FREE ebook!
Here’s the set-up:

From the USA Today bestselling author of The Last War, The Age of Embers, and Dark Days of the After comes a brand new post-apocalyptic survival saga, The Abandon Series.

Leighton McDaniel is in her first year at Northern Kentucky University when an EMP detonates above the US.  The lights are out, the grid is down, and electronics have failed, including Leighton’s new hearing aids. Unbeknownst to the college town of Highland Heights, the weather warning system is down and tornados are forming.  As Leighton heads for her boyfriend’s farm, an admirer of hers quietly takes chase. Nothing covers one’s tracks better than shadows and chaos, but some battles turn quickly, leaving one to wonder, who is the wolf, and who becomes the prey?

As the tornado’s winds begin to whip, and Kentucky descends into lawlessness, the former Golden Gloves boxer, Hudson Croft, is forced to defend his home from violent opportunists.  Hudson is ready for the anarchy, but he never anticipated the tornado heading his way, or the war Leighton McDaniel brought with it.  Although Hudson is anxious to return to the fight, he remains haunted by his past boxing injuries, for one blow to the head, and it’s lights-out on his life.

Amid such an unprecedented attack, a handful of citizens will fight to survive the many storms bearing down upon them.  Those clinging to the old world will perish while those who abandon the former world will dig in and fight, proving the might and strength of America are not found solely in her military or her commerce, but in the heart of her people.

On November 10, fire up your kindle, grab some caffeine and prepare yourself for a roller-coaster ride through the apocalypse with Kentucky’s finest!