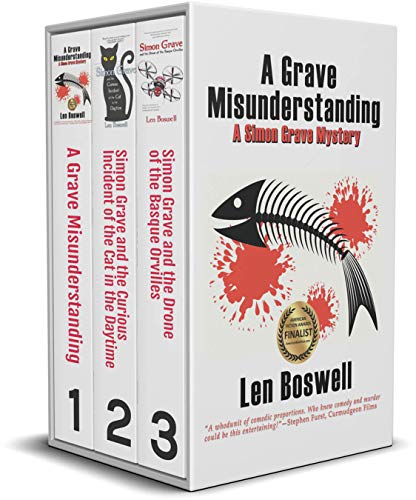 “Boswell has created yet another comedic gem. A laugh-out-loud, tongue-in-cheek exploration of dastardly deeds and mayhem.” –Authors Reading

Murder has come once more to the seaside town of Crab Cove, testing the mettle of “almost handsome” Detective Simon Grave and his “nearly invisible” partner, Sergeant Barry Blunt, who investigate a locked-room mystery with a significant twist: the prime suspects are in the locked room, not the victim, a logic-defying situation that challenges the team at every turn.

As if murder weren’t enough, they must also investigate the simultaneous disappearance of The MacGuffin Trophy from that same locked room, the studio of artist Whitney Waters, famous for her stylized paintings of red herrings.

Who is/are the killer(s)? How did he/she/they get out of the locked room with the trophy, kill the victim, and return unnoticed by others in the room? These and other questions, including the limits of logic and the meaning of life, are posed and perhaps even answered in this quirky, near-future mystery. Yes, there are robots.

Murder rocks the seaside town of Crab Cove, but to solve the crime, Detective Simon Grave must first deal with the curious incident of the cat in the daytime.

Murder has come yet again to the seaside town of Crab Cove, testing the mettle of Detective Simon Grave, his “almost invisible” partner, Sergeant Barry Blunt, and his new assistant, Charlize, a simdroid (an android lookalike of a famous person) who fancies herself a match for Sherlock Holmes, in the simulated body of Charlize Theron.

When a body is discovered on a deserted beach, alongside a deactivated Betty White simdroid, the game is afoot. Grave must not only deal with the murder, but also come to grips with a deadly prognosis for his retired detective father. The murder and his father’s illness take them on a tour of local cemeteries, including a new graveyard that features multiscreen videos celebrating the lives of the deceased.

They soon discover that the only way to solve the murder is to first deal with the curious incident of the cat in the daytime.

Simon Grave and the Drone of the Basque Orvilles (Book 3)

A demon hound haunts Crab Cove, taking its victims as they come. When a mutilated corpse is found in the marshes, Detective Simon Grave rises to the challenge. Everything points to the hound, but it is quickly apparent that the body has been stabbed repeatedly, in a way that suggests serial killer Chester Clink also may be involved. Or maybe not.

Grave and his team, including his partner, Sergeant Barry Blunt, and androids Charlize and Smithers, who fancy themselves as Sherlock Holmes and Watson, follow clues that lead them from drone manufacturing plants, to the labyrinthine caves along the shore, to the abode of a strange Scotsman who plays his bagpipes on a bluff above the crime scene. As always in Crab Cove, one killing leads to another, further pressuring Grave to solve the mystery—fast. The year is 2053. Time to… Release the hounds! (And the drones.)