Cabal: An Apocalyptic End-Times Thriller (The Beginning of Sorrows Book 1) 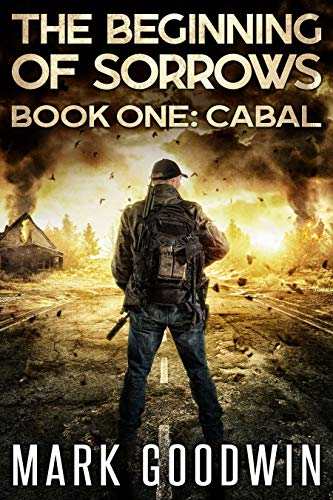 – Learn More
Text-to-Speech and Lending: Enabled
Available on Audible
Enjoy Mark Goodwin Books? Tell us why and WIN a chance for a FREE ebook!
Here’s the set-up:

When Agent Joshua Stone is called to a high-level meeting at the Department of Homeland Security, he learns about a new global order which will be transitioning into power. Stone is read in on the plan for a single planetary government and a world-wide cashless-currency, which will step in to fill the void left by the failing monetary system. To win wide acceptance by the nations of the world, the old system must first be allowed to fail, bringing about a state of global chaos never before seen by mankind. Once desperation has taken the place of pride and hubris, humanity will beg for the proposed one-world empire led by the charismatic tech guru Lucius Alexander.

The United States will fall without a single shot being fired.

While still considered a sovereign nation under the new global charter, America is required to make some major adjustments in order to fit in. One of the mandatory changes comes in the form of oppressive firearms restrictions. Agent Stone is tasked with infiltrating a group of anti-government nationalists to monitor their activities in the wake of the new gun ban. But what he learns from the group while working undercover causes him to question if he is on the right side of the fight.

Stone will have to make an impossible choice. If he chooses to ignore the information gleaned during his time undercover, he will violate his deepest personal convictions. However, if he turns his back on the Global Union, he’ll put not only his own life on the line, but also those of his wife and son.

Don’t miss this chilling depiction of what America will look like in the last days. Read The Beginning of Sorrows, Book One: Cabal, a heart-stopping tale of the end times, today!

As with all works by Mark Goodwin, this book contains no profanity and no embarrassing sex scenes. However, if you’re offended by conservative principles and references to Scripture, this book might not be for you.