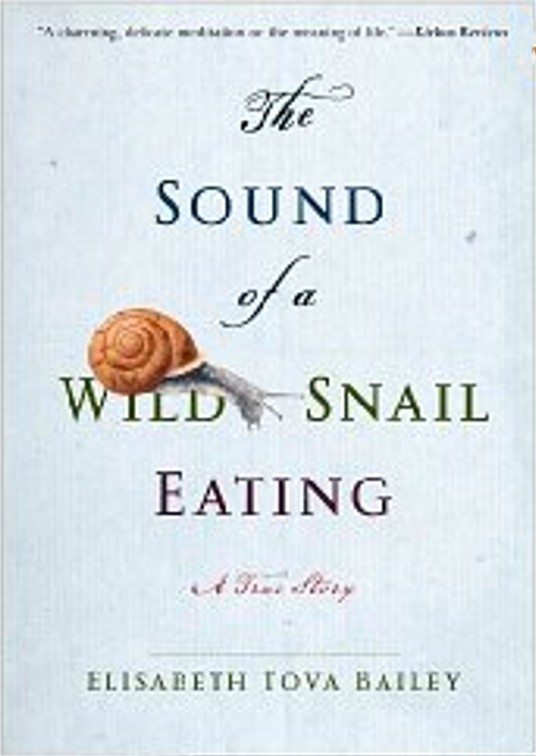 The Sound of a Wild Snail Eating is not your typical memoir. From Amazon:

In a work that beautifully demonstrates the rewards of closely observing nature, Elisabeth Bailey shares an inspiring and intimate story of her uncommon encounter with a Neohelix albolabris -a common woodland snail.

While an illness keeps her bedridden, Bailey watches a wild snail that has taken up residence on her nightstand. As a result, she discovers the solace and sense of wonder that this mysterious creature brings and comes to a greater under standing of her own confined place in the world.

Told with wit and grace, The Sound of a Wild Snail Eating is a remarkable journey of survival and resilience, showing us how a small part of the natural world illuminates our own human existence and provides an appreciation of what it means to be fully alive.

Amazon reviewers have given this book an average rating of 4.5/5 stars across 61 reviews. Top 1000 Amazon Reviewer and Vine Voice Amy Henry says:

Uplifting and fascinating, with no hidden agenda. Elisabeth Tova Bailey was in her mid-thirties when struck with a mysterious illness that soon led to her complete incapacitation. Without knowing the cause, much less the cure or the course that it might take, the disease was a frightening visitor. One day, a friend stops by with a rather odd gift. A snail, from out in the yard. First placed in a flower pot and eventually a terrarium, the snail becomes Bailey’s constant companion. Because of her lack of mobility and energy, much of her time was spent observing the creature.

You might think this would be dull, or worse, that you’d be stuck listening to someone bleakly describing their every physical complaint. Not so. This book has very little to do with health issues and far more to do with curiosity and resilience. Bailey is not a complainer, actual details of her health are few and without self-pity. She doesn’t simply give up either, she makes clear she wants to fight this unknown assailant on her life. That she does so with the help of a small snail is astounding…

So much of the research [about snails] that is out there is fascinating, and Bailey sorts through it and shares the most interesting details. This isn’t just a science project for her, she sees parallels in her condition as well as the snail’s. Illness took her out of her social circle, and her life seemed slow and inconsequential…

What makes this memoir unique, besides her indomitable spirit, is that she doesn’t push any sort of religious or spiritual agenda for her positive outlook. There is no implied message, which is often a feature of such an inspiring book. Her facts are based on solid research, and she doesn’t waste words; her prose is clear and precise…

It actually might make a great gift for a young person interested in science (the “romance” portions are tame). In any case, this book made me want to reconsider how much of my hectic life could be slowed down to enjoy the smaller but ultimately relevant details in the natural world around me.

Get The Sound of a Wild Snail Eating today, while it’s discounted to just $1.99.