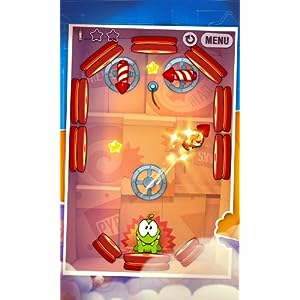 This version of the game is like Cut the Rope meets (the PC game) Crazy Machines or the (Nintendo DS) game Logic Machines.

The follow-up to the award-winning mobile game Cut the Rope has arrived for Android! ZeptoLab’s Cut the Rope: Experiments features the familiar and loveable little monster Om Nom who is discovered by a mad (but not bad) scientist determined to study his candy-loving behavior through a series of experiments.

– Solve puzzles in different ways: the quickest path to feeding Om Nom may not yield the most points

– Use the touchscreen to interact with puzzles: cut ropes, pop bubbles, and use other contraptions to your advantage

The concept of the game is to get the candy to Om Nom’s mouth (while picking up stars for extra points) by using various mechanics built into the game – whether it’s swinging on a rope, being lifted inside a bubble, pushing with little air pumps, etc… Often, this will require some good prior planning and split second timing (which is where the first game irritated me with undeserved failure). This time around – it seems way more precise with what I’m trying to do (or maybe things are a little better spaced out and not so cramped?) and they’ve added several more methods of moving the candy around (bouncing platforms, rope guns, suction cups, rockets).

125 Levels are included in the initial release of the game and it states that more levels are on the way. If it’s anything like the original – there will be lots.

So if you’re a puzzle fan looking for a new casual game challenge, give Cut the Rope: Experiments a try.