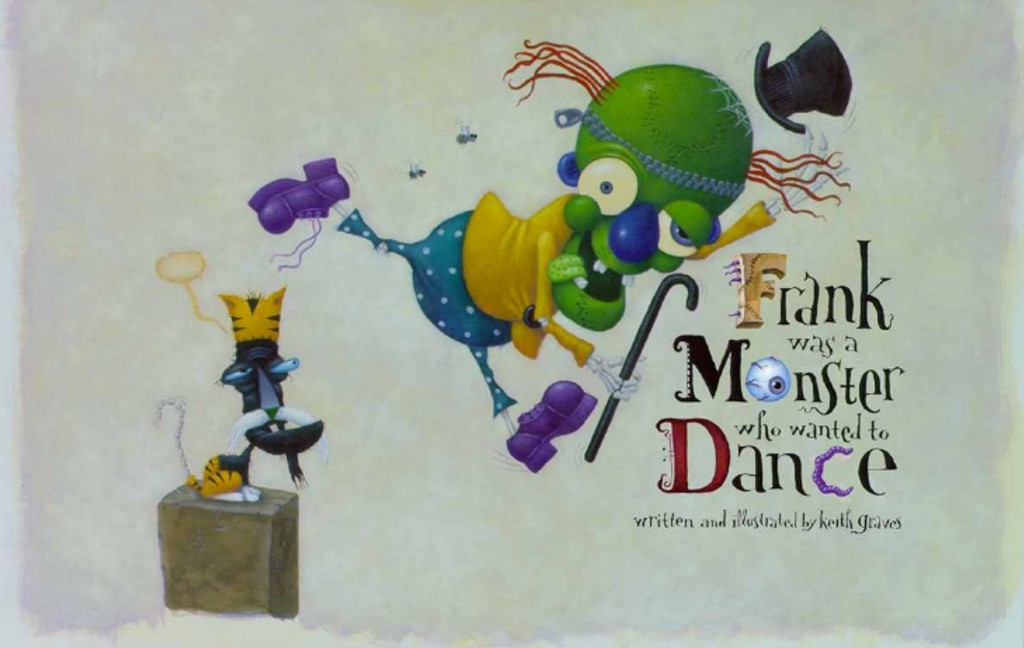 Here’s a perfect book to take full advantage of your Kindle Fire’s color display. Frank Was A Monster Who Wanted To Dance is a picture book told in rhyme, with sly, funny illustrations and playful use of fonts mixed with pictures. Amazon reviewers have given it an average 5/5 star rating across 35 reviews. Publisher’s Weekly says:

Ghoulish gross-outs abound in this one-joke ditty about a zombie’s big break in showbiz. The opening spread pictures Frank at home, relaxing to an episode of Soul Train and accompanied by a patchwork monster-cat. Frank doesn’t look like a hoofer. He’s comprised of a skull-like green head (zippered around the top), a bulbous blue nose, glowing yellow eyes and skeletal limbs. Nonetheless, he has a dream, and to fulfill it, “He drove to the theater/ and jumped onstage./ Then he danced like his shoe size instead of his age!” During his performance, however, Frank makes a faux pas. His brain, complete with worms and flies, accidentally oozes onto the boards, “And after his arm/ fell out of his sleeve,/ the horrified audience/ started to leave.”

Newcomer Graves pays generic, goofy homage to Frankenstein and to 1960s-era hot-rod art. He goes heavy on the purple, electric blue and Astroturf green in his polished, nearly 3-D compositions of acrylic and colored pencil. Even the hand-lettered text, with its occasional incorporation of worms, bulging eyes, etc., contributes to the expansion of the punchline, which will likely hit primary graders’ funny bones. Ages 2-up.

Frank Was A Monster Who Wanted To Dance, the silly tale of a zombie with a dream, will delight kids who are into monsters, rhyming stories, colorful artwork and (mild) gross-out humor.