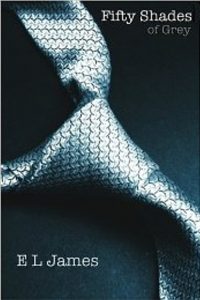 The Slate Book Club recently discussed the book, with a touch of feminist hand-wringing:

Why do women love the new smutty novel Fifty Shades of Grey?

The women’s book club has a new romantic heroine. By day, Anastasia Steele is a college senior at a Vancouver University and a virgin who wears indifferent jeans and reads the usual novels (Tess of the d’Urbervilles, Pride and Prejudice). By night, she is the willing slave of Christian Grey, who trusses her up in his “red room of pain” and slaps her and makes her shiver with just the tip of his whip. You can tell by the characters’ names what general territory we are in: erotic fiction mixed with Harlequin and just a hint of legal brief (apparently bondage drama requires the exchange of elaborate documents and disclaimers).

Fifty Shades of Grey is the Kindle and Goodreads sensation that recently made the round of the morning talk shows and is apparently bewitching women from “the Upper East Side of Manhattan to the suburbs of Seattle,” says Today. Part of a “triple-X trilogy,” the book began as a Twilight fan-fiction story called “Master of the Universe” by someone who called herself “Snowqueens Icedragon” and has now revealed herself to be E.L. James, a TV executive, wife and mother of two in London.

Today convened a Boca Raton, Fla., reading group to discuss why they could not put the book down, and one of the women in it confessed that after working and taking care of the kids all day, “it’s nice for a man to take over in the bedroom.” Host Savannah Guthrie, who used to be the show’s legal correspondent, responded with a version of the mild horror the book has provoked on many a feminist blog: “Is that really where we’ve come to after 50 years, now that women have the power? … Do you think women really want to fantasize about someone causing them physical pain?”

You can read the full discussion on Slate. Over on CNN, there’s a bit more information about the genesis of the book:

James wrote the book and posted it chapter by chapter on a free online publishing site, according to Amanda Hayward, the CEO of The Writer’s Coffee Shop, a small online publisher based in Sydney, Australia, who first read the book almost two years ago and spotted its potential.

“It took us about 10 months to talk her into publishing it,” Hayward says of the author, E.L. James. “She was very reserved and was very unsure and didn’t think there was a market for it.”

There was. In a matter of months, the book has developed something of a cult following. Facebook pages have sprung up in its name and fans are invited to join the “Fifty Shades Support Group” on Good Reads, a book recommendation and review sharing site.

Read the full article on CNN, and if you’d  like to see for yourself what all the fuss is about, get your copy of Fifty Shades of Grey now.