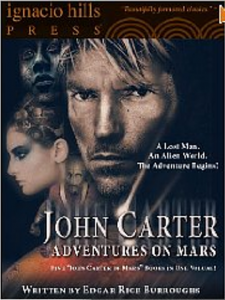 The Disney Sci-Fi extravaganza John Carter is in theaters now, but did you know it was based on a series of classic novels by Edgar Rice Burroughs, the same man who brought us Tarzan and The Land That Time Forgot?

Good news: the first five books in the John Carter series are available in a single Kindle edition, priced at just 99 cents!

While it’s true that public-domain material like this can also be had for free from sites like Project Gutenberg, the advantage of investing a buck is that this Kindle edition is not just a scan-and-publish job. The book has been formatted for Kindle and includes a hyperlinked table of contents.

These classic adventure stories have influenced such popular, modern works as Avatar and Jurassic Park, and of course Tarzan has been made into a terrific Disney animated film, the live-action film Greystoke: The Legend of Tarzan, and many other film and television versions as well.