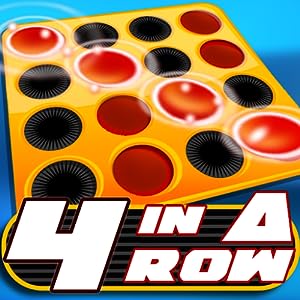 Free App of the Day

Today’s Amazon Free App of the Day is Fantastic Four in a Row HD, rated an average of 4/5 stars across 56 reviews. If you like Connect Four or Pente, you’ll like this digital version of the same basic concept: first to get four tokens in a row wins.

But what makes this game even better than the original, real-world “in a row” games is that you can choose to play different, themed boards (e.g., Christmas, sports, etc.) that feature special graphics, music and sound effects. It’s a fun, casual game that’s appealing to kids and adults alike.

App Permissions – What’s It All About?

You’ve probably read some negative app reviews that cited the permissions the app requires as the reason for the negative review. If you’ve wondered what all this permissions stuff is about, read on.

The platform on which the Fire’s software is built is Android, the same platform that originally started out as a smartphone alternative to the iPhone. Before the Fire and other Android-based tablet computers came out, all Android apps were made to run on smartphones. Many of these apps were designed to expand the phone’s basic functionality by enhancing its built-in tools, such as the contact list, calendar or GPS programs. In order to do this, the user had to grant the app “permission” to access the phone features it was designed to work with.

Enter the Opportunistic Hackers and Spammers

Malicious developers were quick to catch on to this permissions thing, and started releasing apps that required permissions they didn’t really need, but could use to spread viruses or spam, or steal the user’s personal or financial information. Often, these developers would entice users into downloading their apps by offering them for free. Soon after downloading the malicious app, the user would notice his phone was running more slowly, or his contacts would let him know they’d begun receiving spam from his phone. Savvy users started paying closer attention to permissions requirements.

What Does All This Smartphone Stuff Have To Do With The Fire?

Obviously, the Fire is not a smartphone. But it does still have an onboard contact list and email function, and depending on the apps you use, may contain other personal or financial information as well. Any of these could be exploited by malicious app developers. While Amazon tries to bar malicious developers and their apps from the Amazon App Store, because malicious apps are carefully disguised as legitimate apps, it’s impossible to catch every single one at the door.

How To Recognize Malicious Apps – Check the Permissions and Reviews

The easiest way to spot a malicious app is to check the permissions it requires, all of which will be listed on its Amazon Product Page. If an app requires permissions that seem unnecessary for it to run, such as a drawing app that requires you to grant it access to your contact list, that’s a red flag. Even so, such a red flag does not automatically mean the app is malicious. Perhaps the drawing app has a feature that allows the user to email finished drawings, and if that’s the case, then access to your email program makes sense.

Many cautious users will still opt not to download such an app, preferring to avoid any app that requires certain permissions as a blanket policy.

A second method for separating legitimate apps from malicious ones is to check the one-star reviews. When a user has found a given app’s permission requirements are excessive or suspicious, she’ll often post a negative review for that specific reason.

To learn more about all the types of permissions apps may require and what each one means, see this article on Technically Personal.