All the Pretty Ones: A serial killer thriller with nail-biting suspense (Detective Jackie Cooke Book 1) 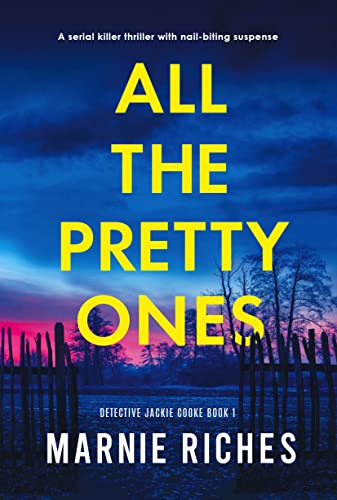 The girl is sitting upright, her dark brown hair arranged over her shoulders and her blue, blue eyes staring into the distance. She looks almost peaceful. But her gaze is vacant, and her skin is cold…

Seventeen-year-old Chloe Smedley walks out of the school gates and spots the person waiting for her across the road. She waves excitedly, hurrying towards them…

A week later, Detective Jackie Cooke is first on the scene when Chloe’s body is found. Jackie’s own little brother vanished as a child, and she has vowed to find justice for every other victim since. But as she looks at the way Chloe has been left sitting upright at a garden table, a chill in her gut tells her this case is bigger – and darker – than any she has known. She lays a protective hand on the baby in her belly, and vows to make the world a safer place for her children.

Then another body is found, posed in the same strange way, and Jackie feels certain she is hunting a monster who preys on the vulnerable. Her team won’t listen, but Jackie is convinced these victims are all connected – targeted for some terrible purpose.

But when she returns home soon after to find a multi-coloured friendship bracelet on her kitchen counter, her blood runs cold. It’s the same one her brother was wearing the last time she saw him, nearly thirty years before.

Determined to follow every clue and prevent another innocent life being lost, Jackie realises that only digging into her own past will let her catch the killer. But he is already watching her every move… will she stop him before he strikes again?

An absolutely gripping crime thriller that will keep you racing through the pages. Fans of Kendra Elliott, Rachel McLean and Val McDermid will love All the Pretty Ones.