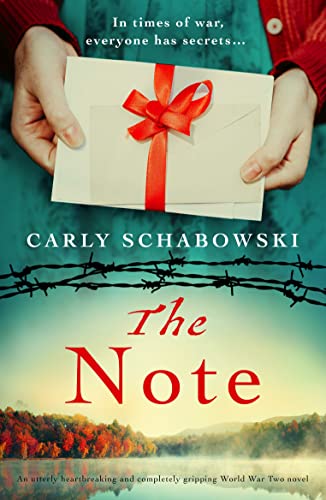 ‘Heartbreaking… I found myself crying, mesmerized and totally lost among the pages… I absolutely loved everything about this… Wonderful, moving and phenomenal.‘ Page Turners Caroline, ⭐⭐⭐⭐⭐

Auschwitz, 1942. Adeline and Jozef cling to each other as they are directed off the train and pulled apart by Nazi guards at the gates of Auschwitz. Stripped of their belongings, their arms are inked with prison numbers. In the death camp, their days are numbered––will they ever see each other again?

South Carolina, ten years later. As a summer storm sweeps in, shocked townspeople gather at the edge of a forest lake. The body of a local girl had been found on the bank that morning. As thirteen-year-old Alice stands in the crowd, she catches sight of a figure, hidden in the trees, watching. She knows who he is—a newcomer in town, a German refugee named Jozef. Her neighbors whisper that he can’t be trusted—that he saw terrible things in the war. But what, Alice wonders, is he doing here now? And could he possibly be connected to what has just happened?

When Alice confronts the man, Jozef opens ups about his painful past. Hearing about the desperate choices people were forced to make in Auschwitz, and the hunt for freedom amongst so much heartbreak, Alice starts to see her own life—and the death of her friend—in a new light. And, as their bond deepens, Alice finally uncovers why Jozef was at the lake that day. When the long-awaited storm breaks the suffocating heatwave, the terrible truth finally comes out, and Alice’s life will never be the same again…

An incredibly gripping and tearjerking page-turner perfect for fans of The Tattooist of Auschwitz, When We Were Yours and We Were the Lucky Ones.