On the Border (A Samantha Church Mystery Book 5) 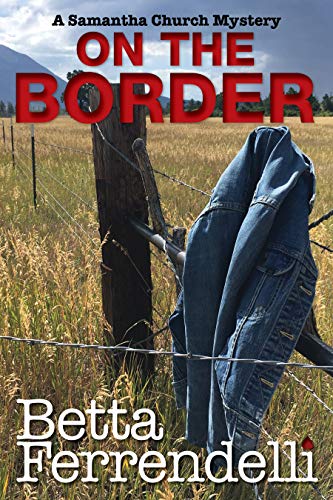 4.4 stars – 114 reviews
Kindle Price: FREE!
Everyday Price:
Text-to-Speech and Lending: Enabled
Enjoy Betta Ferrendelli Books? Tell us why and WIN a chance for a FREE ebook!
Here’s the set-up:
When an anonymous, handwritten letter arrives at the newspaper with a whistleblower’s claim that his construction company is involved in murder, money laundering and harboring undocumented workers, reporter Samantha Church senses that another major news story is about to unfold.
Sam recruits cub reporter Hunter John Hollingsworth—an energetic, bilingual journalist eager to work on his first big story—to help her with the investigation.
With the informer’s cousin missing and feared dead and a starting point of a seemingly inconspicuous cell phone store, Sam and Hunter are deeply drawn into the impending story.
But standing in the reporter’s way are villains with a sinister leader. They want nothing more than to protect the operation they’ve spent years building—and they’ll resort to any means necessary to keep their scheme alive.
Determined to expose the truth, Sam and Hunter follow a winding path of evil and hatred that threatens dire consequences for everyone involved.
On the Border, is the fifth and newest fast-paced novel in the award-winning mystery series featuring Sam and the rest of the great ensemble cast of characters who will keep you coming back for more.