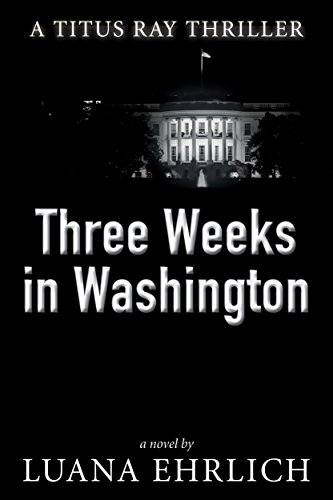 – Learn More
Text-to-Speech and Lending: Enabled
Available on Audible
Enjoy Luana Ehrlich Books? Tell us why and WIN a chance for a FREE ebook!
Here’s the set-up:

Titus uncovers a plot to attack the nation’s capital with chemical weapons.Can he convince a Syrian asset to help him stop the deadly attack?

CIA intelligence operative, Titus Ray, arrives in Washington, D.C. on the day a terrorist enters the Washington Navy Yard and murders five people. Convinced the incident is connected to a Hezbollah plot to use chemical weapons on an American city, Titus jeopardizes his own career to interrogate the killer and learn the truth.

Exposing a General . . .After the shooter reveals the identity of an Iranian deep-cover operative living in Washington, D.C., Titus embarks on an intelligence operation spanning two continents and exposing an Iranian general obsessed with destroying America.

Engaging an Enemy . . .As time runs out, Titus engages the enemy in a treacherous game of cat and mouse to save the lives of thousands and defeat the terrorists. Can his faith sustain him as he faces his greatest challenge yet? Is he willing to lose Nikki to save his country?

What People Are Saying About Titus Ray Thrillers:“The characters are very well-developed and believable. I enjoyed the way the author described Titus Ray’s internal struggles and character flaws creating a very authentic main character. The story was action-packed and one is left wondering how the author could be so knowledgeable of the CIA and the work of their covert operatives.”

“Excellent read full of action and intrigue, with a dash of soul mixed in for good measure.”

“Following the adventures of Titus Ray is exhilarating. I felt my blood pressure going up and down.”

“A key aspect of this series is that Titus is a recent convert to Christianity who is growing in his faith and struggling with what it means to be a Christian.”

“I’m definitely hooked on this series. Much suspense, twists and turns.”

“ I recommend these books for all who enjoy good clean fiction, especially involving current events in the world. I like the development of the characters and their relationship””very believable. I gave it five stars for the great storyline and characters that seem so real.”