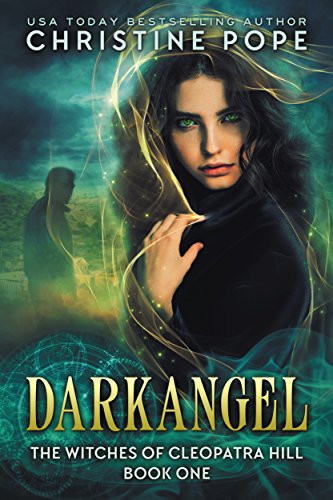 4.3 stars – 463 reviews
Kindle Price: FREE!
Everyday Price:
Text-to-Speech and Lending: Enabled
Available on Audible
Enjoy Christine Pope Books? Tell us why and WIN a chance for a FREE ebook!
Here’s the set-up:
Finding the man of your dreams can be a real nightmare….

As the future prima, or head witch of her clan, Angela McAllister is expected to bond with her consort during her twenty-first year, thus ensuring that she will come into her full powers at the appointed time. The clock is ticking down, and her consort has yet to make an appearance. Instead, her dreams are haunted by a man she’s never seen, the one she believes must be her intended match.

But with time running out, and dark forces attempting to seize her powers for their own, Angela is faced with a terrible choice: give up her dreams of the man she may never meet and take the safer path, or risk leaving her clan and everyone in it at the mercy of those who seek their ruin.

Darkangel is the first book in the Witches of Cleopatra Hill, a paranormal romance series set in the haunted town of Jerome, Arizona.