Crossing the Digital Faultline: 10 Leadership Rules to Win in the Age of Digitalization and Uncertainty 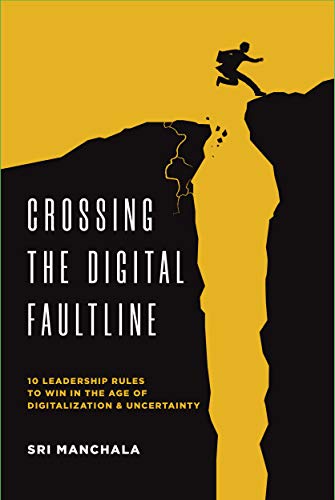 – Learn More
Text-to-Speech and Lending: Enabled
Here’s the set-up:
Despite enormous leadership efforts, financial investments, and technology implementations, only 7% of companies across industries succeed at digitalization. Combining data from 5,000+ companies and over 20 years of leadership experience, Sri Manchala deconstructs the array of forces that have torn up business ecosystems into an earthquake-like zone, now made worse by the COVID pandemic.

Crossing the Digital Faultline: 10 Rules to Win in the Age of Digitalization and Uncertainty explains the new rules governing life on the digital faultline, and demonstrates how understanding those rules has powered the success of the few—while ignoring them explains how so many companies have failed despite their effort and investment.

With a non-technical and conversational approach, Manchala presents a data-driven analysis of 10 Rules that determine digitalization success or failure. Much like the laws of physics, these rules cannot be ignored or controlled, and they will only evolve to increasing complexity over time. Utilizing simple yet powerful frameworks, Manchala demonstrates the undisputable results produced by leaders and organizations who practice these rules with discipline.

Crossing the Digital Faultline shows that the single most important driver for a successful digital transition is leadership, and that the right leadership entails a seismic shift in mindset. Unifying the style mastered by the successful 7% and principles learned in the military, Manchala presents a new leadership persona for the Digital Age—the Methodical Innovator—and an invaluable 120-day playbook for transitioning to this new persona and crisis-proof leadership.

Learn how to:
•Take advantage of the forces of the digital faultline affecting your industry, business, and role.
•Master a data-driven and iterative approach from strategy to execution using the 10 Rules to produce consistent, sustaining results.
•Transition into a new leadership persona for the Digital Age.
•Develop a winning and adaptive team that can carry your organization to digital success.

In a matter of months, you can regain control and transition from a state of confusion, anxiety, and misalignment to a state of control, progress, and sustained success—a safe place away from the Faultline. Start your journey today.