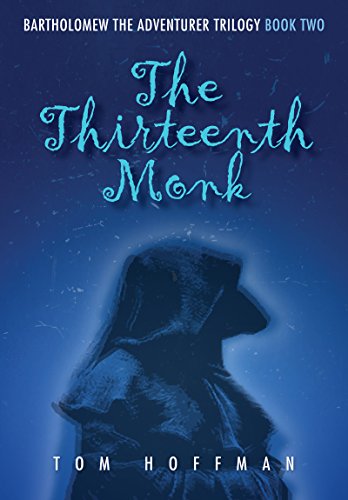 4.8 stars – 22 reviews
Kindle Price: FREE!
Everyday Price:
Text-to-Speech and Lending: Enabled
See more titles by Tom Hoffman
Here’s the set-up:
From award winning author Tom Hoffman, creator of the Orville Wellington Mouse adventure series
“An endlessly stimulating sequel that caters to intellectually fearless readers.” –Kirkus Reviews“A homogeneous blend of Peter Rabbit and Alice in Wonderland, these stories are well worth the effort to really read them. They speak to any age and any level of enlightenment.”
“Unique, charming, humorous, whimsy, lovely, and gently philosophical. Not since Watership Down have rabbits come alive as heroes and villains.”

The Bartholomew the Adventurer Trilogy is a romping tale of adventure set in the far distant future after humans have vanished from the planet. The protagonist is a self centered rabbit named Bartholomew who sets out in search of a missing object which he is unable to describe or name. Along the way he meets his adventuring companion, Oliver T. Rabbit, a brilliant scientist who also undergoes a deep transformation in the trilogy, coming to understand that there is no magic, only science, whether it’s time travel, parallel dimensions, manifesting physical objects with thoughts, or reincarnation. Their adventures take them to lost cities, parallel universes and other planets, along the way meeting a host of memorable characters including ancient robotic rabbits, the Tree of Eyes, the Singing Monks of Nirriim, the Blue Spectre, and Edmund the Explorer.

The Thirteenth Monk
Oliver T. Rabbit develops a revolutionary new invention and Edmund the Rabbiton develops an inexplicable new phobia.  When Edmund unwittingly opens an interdimensional doorway, Bartholomew, Oliver, and Edmund are pulled into the strange world of Nirriim.  Edmund encounters the enigmatic thirteen Blue Monks, Master Singers of Nirriim and relives a life changing traumatic event which occurred fifteen hundred years ago during the Anarkkian Wars. With help from Ennzarr the Red Monk, the eerie Blue Spectre, and two unlikely treasure hunters named Thunder and Lightning, the three adventurers must find the lost Seventh Key and defeat the inconceivably powerful Wyrme of Deth or be trapped forever in the world of Nirriim.

Excerpt from The Thirteenth Monk:
“Edmund, I am the Thirteenth Monk, and I am going to tell you a story that may help you understand the true nature of the song we will sing for you. When you hear the story it may sound familiar to you, as though you have heard it before, perhaps a very long time ago when you were young, or even before then.” Edmund closed his eyes, listening to the calm, soothing voice of the Thirteenth Monk.
“There was once a bunny who lived by the ocean. Every day he would stroll along the sandy beach and pick up thoughts which had washed ashore. He would ﬁnd them in shells, under rocks, and sometimes even tangled in seaweed. “Oh, this is a good one,” he would say, “we see chaos, but if we look carefully, if we look beneath the chaos, we ﬁnd order and perfection.” And into his bucket the thought would go. When the bunny had reached a ripe old age he gathered all the thoughts together and placed them carefully into a large silver cauldron heated by the ﬁres of life. Using a straw broom, he stirred them thoroughly, and as he was stirring he listened carefully. Much to his surprise he heard the ocean singing a wordless song of incomparable beauty. The bunny closed his eyes and said, “Ah, it was all worth it.”
The Blue Monk stood up. “We will sing for you now, Edmund. It is the ocean’s wordless song of incomparable beauty. It is the song of the universe, the song of your past, the song of your future, the song of life.”
Edmund’s eyes were still closed when he heard the ﬁrst Blue Monk sing.