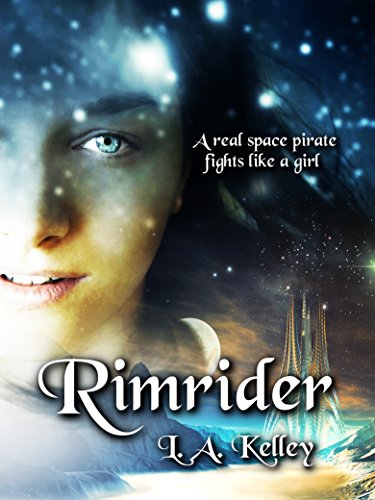 4.2 stars – 73 reviews
Kindle Price: FREE!
Everyday Price:
Text-to-Speech and Lending: Enabled
Available on Audible
See more titles by L. A. Kelley
Here’s the set-up:
Orphan, pirate, spy.     Teenager Jane Benedict is awakened by her father and ordered to memorize a mysterious code. Hours later, Mathias Benedict is dead and Jane and her brother, Will, are wards of United Earth Corporation. To evade the company’s murderous clutches and uncover the meaning of her father’s last message, Jane leads Will on a desperate escape across the galaxy aboard the Freetrader smuggler ship, Solar Vortex. Tangled in the crew’s fight against UEC, Jane saves the life of young smuggler Maclan Sawyer and learns her father’s code identifies a secret cargo shipment that may spell doom for the entire Freetrader cause and the extinction of an alien race.     Piracy, intrigue, romance, and a daring rebellion from Earth wait on the planet Rimrock. Will Jane answer the call to adventure and find new purpose on the galactic rim or will death for high treason be her fate?

“The world L. A. Kelley creates captivates…From beginning to end this story keeps the reader guessing in the best way possible, leaving them satisfied and waiting for the next book in the series.” InD’tale Magazine