Before You Go: A heartbreaking page-turner about love, loss and family 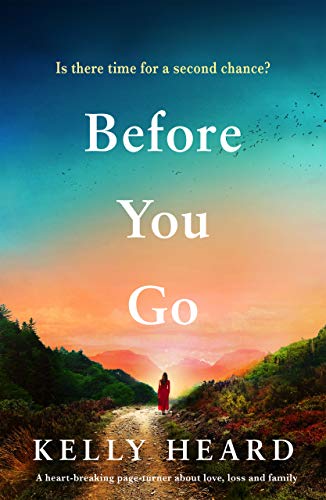 – Learn More
Text-to-Speech: Enabled
Available on Audible
See more titles by Kelly Heard
Here’s the set-up:
“I was hooked from page one… my heart was broken… So beautifully written… extremely beautiful and emotional!” Goodreads Reviewer ⭐⭐⭐⭐⭐

The bond between a mother and daughter is meant to be unbreakable. What happens when it shatters?

Western Virginia, 1979. Dell Shaw knows the relationship between a mother and daughter should be something warm, soft and safe. But her relationship with her former beauty queen mother, Anita, has never been like that. And then one day, Anita packs up and leaves home, abandoning Dell to look after her alcoholic father and grow up alone.

When Dell meets handsome Mason, who has his own scars, she begins to think she can build a new, happy family with him. A year later, she’s shocked to find herself heartbroken and alone with a new-born baby girl and only her mother to turn to. When Anita refuses help and instead arranges for the local church to take the baby away, Dell knows she won’t ever speak to her mother again.

But all that changes on the day Dell discovers her daughter is missing.

Anita knows where the child might be. There’s only one problem—Anita is in a coma, fighting for her life. As Dell divides her time between her mother’s bedside and searching for her daughter, she finds herself discovering new things about her past that make her wonder if she can forgive her mother after all. But will she be able to reconcile with her mother and find her daughter before time runs out?

An unforgettable and heart-wrenching debut about the endurance of love, the power of forgiveness, and finding beauty in the world around us. Your must-read book of 2019. Perfect for fans of Where the Crawdads Sing, Kristin Hannah and Kerry Lonsdale.

Book club discussion questions are included in the book.