Book of David: A Manifesto for the Revolution in Mental Healthcare 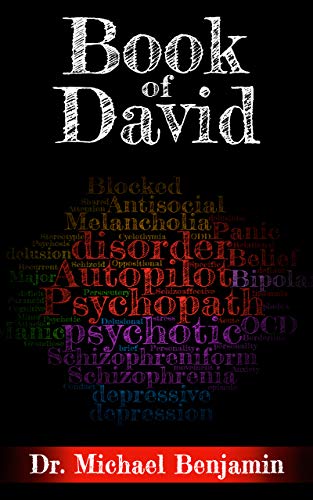 This is a fascinating and very personal book. Benjamin holds our attention through his mastery of story-telling and despite the avalanche of pretty awful jokes. His tales of the patients he encountered in his long career as a psychiatrist are fascinating and make us take his critical views of his specialty seriously. The title, with its intentional biblical overtones, sets the scene. David was a young colleague who suffered a prolonged and agonising death after a cycling accident left him quadriplegic. The substance of the book, “a manifesto for the revolution in mental health care”, are the views they would have discussed had David survived.Michael Benjamin was a fellow medical student more than half a century ago. Our paths diverged and I have learned of his clinical career and writings only from a distance. His humanity, however, remains undimmed. His care for the patients, his wish to understand the basis of their psychoses and his belief in the importance of the personal interaction (the doctor-patient relationship) shines throughout the book. It is no surprise that he is excoriating on the dependence now placed on pharmaceutical treatments and on the pharmaceutical industry for their, often uncritical, promotion. He shines a bright and uncomfortable light on many treatments that were, until quite recently, in common clinical practice without robust evidence for their efficacy and which caused real harm.His views on our development from infancy are well written and based on his vast experience of psychiatry over many years. The unconscious processes that govern our conscious actions are well described as are the possible links between dreams, day-dreams and psychoses. I, and I suspect the author, do not know if these concepts help us understand mental ill-health any better but the intellectual arguments are certainly worth considering. This text is no conventional assessment of mental illness and its treatment. It is much more. It is the culmination of a lifetime treating real patients with real, and often intractable problems. Benjamin’s reflections reflect the humanity of the man, a quality not always found in clinical practice. They also confirm my view that psychiatry was not for me.

A Manifesto for the Revolution in Mental Healthcare

Throughout modern history, previous generations of psychiatrists have perpetrated a very sordid series of misdeeds which we cannot explain away. Our helping hand to the Nazis and Soviets cannot and should never be forgotten or brushed aside. I fear we have provided the next generation with another batch of reasons to question themselves with.