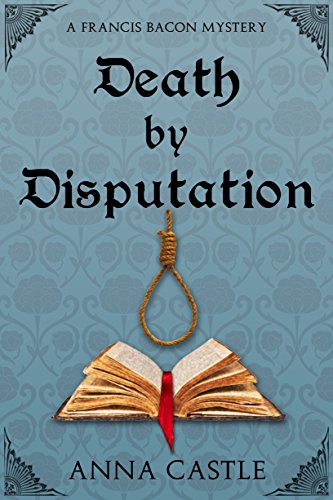 4.1 stars – 86 reviews
Kindle Price: 99 cents
Text-to-Speech and Lending: Enabled
Available on Audible
See more titles by Anna Castle
Here’s the set-up:
Thomas Clarady risks his life, his eternal soul — and his chastity! Tom is recruited to spy on a group of radical Puritans at Cambridge University with Francis Bacon as his spymaster — his tutor in tradecraft and politics. Their commission gets off to a deadly start when Tom finds his chief informant hanging from the roof beams. Now he has to catch a murderer as well as a seditioner. His first suspect is the volatile poet Christopher Marlowe, who keeps turning up in the middle of Tom’s investigations.Dogged by unreliable assistants, chased by lusty women, and harangued daily by the exacting Bacon, Tom risks his heart and soul to stop the villains and win his reward.First In Category for the 2015 Chaucer Awards Elizabethan/Tudor period.Get this second exciting adventure in the Francis Bacon historical mystery series today!