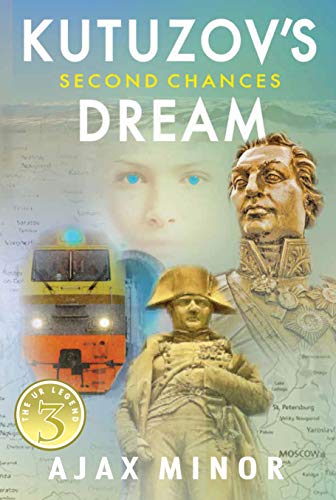 – Learn More
Text-to-Speech: Enabled
Here’s the set-up:
Kutuzov’s Dream is the stunning conclusion of The Ur Legend trilogy first introduced in Sun Valley Moon Mountains and continued in The Girl from Ipanema.The world is poised for the ultimate confrontation, not just of Good versus Evil, but of Good versus the evil in all of us and against a foe that refuses to take a side at all, creating chaos and cruelty simply because it can. To combat such a force will take the combined military strength, knowledge and courage not just from the world of today, but from centuries past. On the fabled battlefield of Borodino, Napoleon Bonaparte teams up with his historic foe, Russian General Mikhail Kutuzov, to lend their support to our heroes from the previous books: Ur, Carmine and Buford Stemp.Kutuzov sums up the situation: “We are fighting a 12th century foe on a 19th century battlefield, using 20th century weaponry, equipped with 21st century technology.” But this is not simply a tale of warfare and weapons. As with the first two books, Kutuzov’s Dream contains moments of deep reflection and moral philosophy as well as a tender love story as Ur grows into womanhood.As he prepares for battle, Buford Stemp speaks of “tightening the bolts that fasten his soul.” As readers reach the conclusion of the sweeping epic that is The Ur Legend, they will find their minds opened and challenged with new ideas, their hearts warmed and broken by the fates of memorable characters. Perhaps they, too, will find themselves tightening the bolts that fasten their souls.