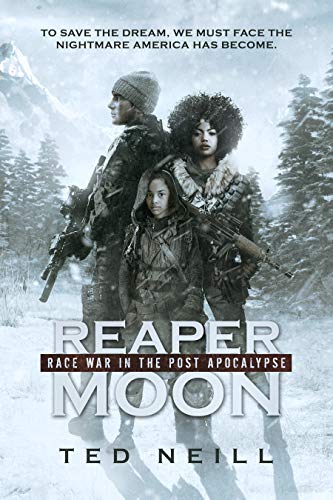 2.8 stars – 7 reviews
Kindle Price: $4.99
Text-to-Speech and Lending: Enabled
Enjoy Ted Neill Books? Tell us why and WIN a chance for a FREE ebook!
Here’s the set-up:
EXCERPT: FROM KIMBERLY BETHUNE TOMLINSON’S JOURNAL JUNE 19th, 2024I’m glad you are reading this. It is a record of what we did when all the gods were dead. We live in the aftermath of the HEDV retrovirus outbreak. The effects of the virus were catastrophic. Billions died. Some people had immunity to the virus: the small percentage of the population that carried one abnormal copy of the hemoglobin gene, the gene that causes sickle cell disease.You see where I’m going, don’t you? More people of color have survived, immune, than whites.The usual demographics of the US are now inverted. With the correlation of survival with darker skin color, it has become all race. It always was.Most white people were all right with this change. But you can guess who isn’t.White supremacists. MAGA hat wearing, confederate flag waving, tiki torch bearing white people. You can guess why: their whole worldview has been flipped. Health, wealth, beauty–all that was attractive and desirable–is now associated with blackness. Poverty, illness, criminality, the breakdown of family and civility–these are white things now. And the supremacists–in full and utter denial that it is their obscure genetic connection to Africans that has granted them immunity–are apoplectic. They’ve declared war. They’re out to exterminate all people of color.And thanks to their persistent lobbying efforts of the NRA to ensure semi-automatic rifles, high-capacity magazines, and bump stocks were never regulated (even while things such as cars, nasal decongestants, milk, and happy meals were), there are more guns left in America than people. Black people, their white allies, we knew it was time or organize, to save ourselves. So now it’s wild west, Mad Max, Red Dawn, Hunger Games, Civil War II, whatever you want to call it.The apocalypse has come.God help us. CONTENT WARNING: Contains racist language and scenes of violence.