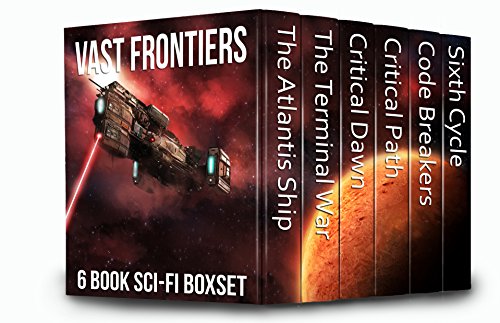 The Atlantis Ship
A legendary enemy attacks…
Galactic peace is threatened…
Unless one man can find and stop the Atlantis ship.
Carson Mach, a former war hero turned freelancer, seeks the biggest payday of his life when he’s tasked to hunt down a ghost ship that has echoed through the centuries. The legendary Atlantis ship has become a reality, appearing at the Commonwealth frontier, and obliterating an orbital station. Somehow, Mach must find a way to solve an ancient mystery if he’s to succeed where everyone else before him has failed.

The Terminal War
A millennium into the future.
In a galaxy far from Earth.
We were not prepared for the Terminal War.
Billions of lives are at risk as enemy forces mass on the frontier of the Commonwealth. If the planet Terminus, the center of all the Commonwealth’s technology, falls, we will lose everything, and there will be no way back. Carson Mach rides again in an attempt to save the galaxy.

Critical Dawn
Some mysteries should stay buried.
A centuries old plan unfolds.
Archaeologists Pippa Quinn and Charlie Jackson find advanced technology in undisturbed 16th Century graves. A portent, the discovery precedes thousands of giant sinkholes opening up across the globe marking the start of an invasion. Humanity will have to fight for survival, sacrificing the life they’ve known to protect Earth from an ancient and previously dormant enemy, and even that might not be enough…

Critical Path
Destroying the croatoan’s seat of power has grave consequences…
The world faces its final breath unless bitter enemies can work together.
The planet is recovering after Denver and his group managed to stamp out the immediate alien threat. But when shocking information comes to light, his team set off on an immediate mission north to stop the impending destruction of Earth.

Code Breakers
In a post-apocalyptic future, humanity survives within a single city run by a shadowy benefactor known only as The Family. Each week the death lottery claims more lives and Gerry Cardle, head of the lottery, inexplicably finds himself next on the list.

Sixth Cycle
In the blink of an eye, the world changed.
Danger lurks around every corner.

Captain Jake Phillips wakes in his crash landed craft and finds Earth transformed into a frightening new world. He faces two immediate threats that will test his survival skills to the limit.