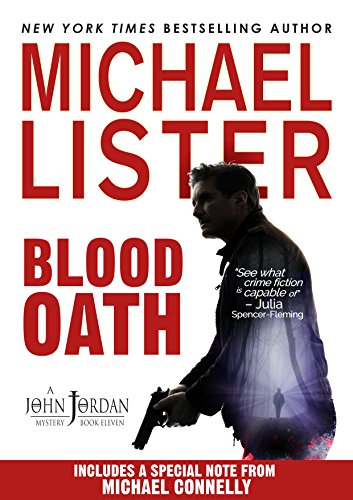 John Jordan is once again carrying a gun and a badge—and he’s going to need them. Balancing family life with being a cop and a prison chaplain takes grit and grace—and John has plenty of both. Working two cases that may or may not be connected, John is investigating the disappearance of a young army ranger home on leave and one of the most sadistic serial killers he’s ever encountered.

“Michael Lister is a giant talent with a unique vision. His landmark John Jordan Mystery series is a treasure of contemporary literature.” Florida Weekly

“Another great ride with a very assured driver behind the wheel.” Michael Connelly“Blood Oath is a wonderful book staffed with Lister’s uniquely intriguing characters fighting crime with all they have including their lives. His villains are some of the most evil I have ever read. The victims never cease to move my emotions. The heroes are noble yet flawed and all the more believable because of their flaws.” ★★★★★5 star Amazon review.

Find all of Michael Lister’s Kindle titles on BookGorilla

1 thought on “<p style="text-align: center;"><strong>John Jordan is back investigating the disappearance of a young army ranger home on leave and one of the most sadistic serial killers he’s ever encountered.</strong> <br /><strong><em> Blood Oath</em> by Michael Lister</strong></p>”