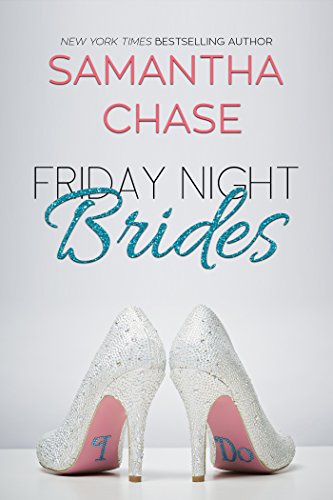 4.5 stars – 82 reviews
Kindle Price: $2.99
Text-to-Speech and Lending: Enabled
Available on Audible
Don’t have a Kindle? Get yours here.
Here’s the set-up:

They’ve been friends since they were five, and modeling for Enchanted Bridal has been as much of a part of their lives as their friendship has. And this season has them seeing more than new wedding trends.

Hailey’s family owns Enchanted Bridal and she knows there’s a possibility that someday it will be hers. She’s not sure that’s the path she wants to take, but she does know that she’s been hopelessly crushing on the perfect man and bridal show model Logan Baxter III. While failing to gain Logan’s attention, she can’t seem to get rid of the less-than-perfect man – and model – Jackson Carr. He’s big and bold and tattooed – pretty much everything Hailey despises. And yet…there’s something about him that has Hailey questioning her definition of perfect.

Becca’s got a knack for dating the wrong kind of guys. When her current boyfriend publicly dumps and humiliates her, she’s devastated. Wanting to run and hide, she’s mortified that the stranger who had witnessed the entire scene is now part of the Enchanted Bridal family. But when Max Abrams offers her comfort and tells her that he thinks she’s beautiful, she has to wonder if maybe getting dumped by Mr. Wrong has finally led her to her very own Mr. Right.

Angie’s loud and feisty and completely fearless. That is until she gets dumped by the one guy she really had feeling for. It opens her up to insecurities she didn’t know she had and she’s not sure what to do about it. But when Sean Peterson comes back into her life in a big way, she’s not sure she’s ready to forgive and forget quite so easily. His persistence and her stubbornness make for an exciting chase, however, but at the end of the season, it’s ultimately up to her if she’s ready to quit running.

Ella’s been planning her perfect wedding to Dylan Graham since she was twelve. Together for thirteen years, Ella’s beginning to wonder if that number really is bad luck. She can’t focus on all that’s right in her life because all she can think about is what she may be missing. Their parents have taken over their wedding, her friends all seem to be in crisis and Dylan’s just not listening to her fears. Not one to ever make waves, she suddenly finds that that’s exactly what she’s doing and turning everyone’s life upside down in the process. The life that she once considered boring is now the one she longs for, but it may be too late.

Four friends.
Four crossroads.
Four possibilities for happily ever after

About the Author:
New York Times and USA Today Bestseller/contemporary romance writer Samantha Chase released her debut novel, Jordan’s Return, in November 2011. Although she waited until she was in her 40’s to publish for the first time, writing has been a lifelong passion. Her motivation to take that step was her students: teaching creative writing to elementary age students all the way up through high school and encouraging those students to follow their writing dreams gave Samantha the confidence to take that step as well.

When she’s not working on a new story, she spends her time reading contemporary romances, playing way too many games of Scrabble or Solitaire on Facebook and spending time with her husband of 25 years and their two sons in North Carolina.

“Wow! What a special read! It takes talent to interweave 4 main stories and not have us feeling that we are missing parts of the stories. And then to pull them all together into one main story at the end! This book grabbed my attention from the start & kept me enthralled. Each relationship had its own twists & turns and resolves itself in a way that isn’t always evident. Each of the friends has their own journey to travel and their strengths help them shore up each others weaknesses so they all make it through to the other side. If you love contemporary romance and you are a fan of Nora Roberts, Susan Mallory, Robyn Carr and Jill Shalvis, this book is for you! You will love it!” ★★★★★5 star Amazon review