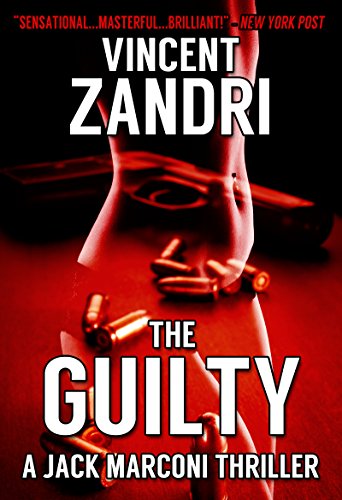 SOMETIMES THE RECIPE FOR TRUE LOVE CAN BE THE PERFECT POISON!

From Thriller and Shamus Award winner Vincent Zandri and from the Bestselling P.I. Series that has sold close to ONE MILLION copies:

Jack Marconi is back in legal hot water. In The Guilty, Jack finds himself investigating a local restaurateur and spoiled playboy who’s accused of attempting to murder his school teacher girlfriend. As the now brain-damaged young woman begins recalling events of that fateful dark winter night when she was allegedly pushed down the stairs of a West Albany mansion, she becomes the target of the powerful but angry foodie/sex-obsessed boyfriend once again. Only this time, he’s cooking up a bloody plot to keep her silenced forever.

“A riveting story..oh, what a story it is: grisly, surprising, and page-turningly suspenseful. A terrific old-school
thriller.” —Booklist (starred review)

“Captures readers’ attention from the opening scene…creates a story that… is hard to tear away from once a reader is hooked.”
—BookPage

“Non-stop action.” –I Love a Mystery

“(Zandri) demonstrates an uncanny knack for exposition, introducing new characters and narrative possibilities with the confidence of an old pro…Zandri does a superb job interlocking puzzle pieces.” –The San Diego Union-Tribune