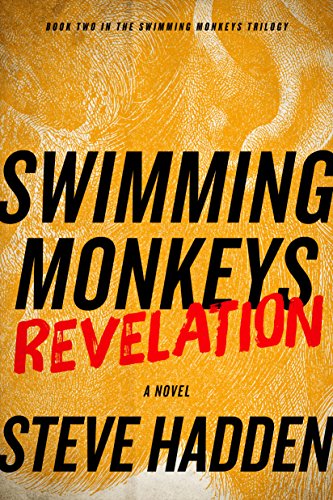 Ryan Webster, a former student turned fugitive, has kept the promise he’d made to his dying grandfather and rescued a new species of monkey from their burned out home in the Amazon jungle. But the explosive secret they carry is about to be exposed. It’s a secret the President of the United States doesn’t want revealed. Recruited by the government to confirm that their genetic code will ignite a social panic and upend economic order, the country’s top geneticist is obsessed with securing his own immortality and will do anything to achieve that goal.

Trapped in the custody of a relentless FBI agent chosen to lead the government’s cover-up, Ryan must find a way to rescue the monkeys he’s promised to protect, before they suffer unthinkable torture in the name of mankind.

Swimming Monkeys: Revelation extrapolates the explosive potential within the human genome into a powerful and entertaining thriller about a young man’s commitment and the thin line between right and wrong.

“So many twists, turns and sudden stops that keep you on the edge of your seat. What’s even better is that the subject matter actually seems plausible.” 5 star Amazon review

Enjoy Steve Hadden’s Books? Tell us Why and Win a Free Book!
Authors and Publishers: How to Sponsor Kindle Nation Daily