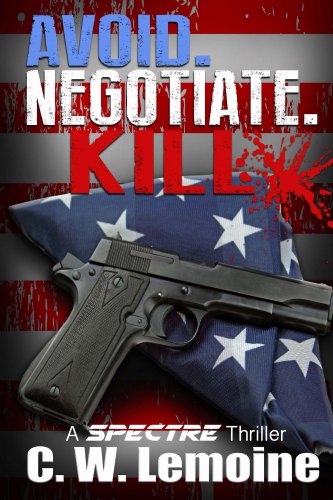 Kindle Price: $5.99
Text-to-Speech and Lending: Enabled
Don’t have a Kindle? Get yours here.
Here’s the set-up:

When fighter pilot Cal “Spectre” Martin is recruited by an unacknowledged government organization named Project Archangel, he believes the demons of his past have finally been laid to rest.

But when a top-secret mission to secure chemical weapons in Syria goes horribly wrong, Spectre finds himself thrust back into civilian life. Within days of his forced retirement, an unknown agent attempts to assassinate Spectre and his friends. Although Spectre escapes the assassination attempt, one of his friends is killed, and Spectre’s world is shattered by the loss.

Still hunted by the mysterious assassins, Spectre must decide whether to Avoid, Negotiate or Kill.