Grab this Kindle Countdown Deal before the clock winds down!

Off My Rocker: One Man’s Tasty, Twisted, Star-Studded Quest for Everlasting Music 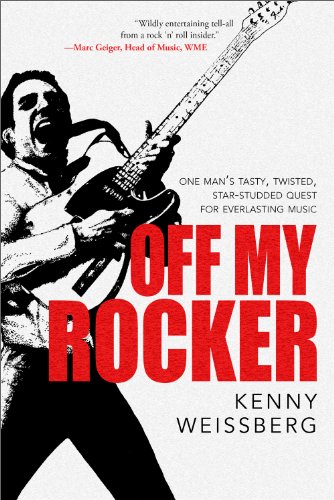 He messed with James Brown’s perfect hair. He counted a pile of cash with Aretha Franklin in her hotel room. He ate popcorn with Leonard Cohen. He cured a dying sparrow with Joan Baez. He got bamboozled by Chuck Berry.

Kenny Weissberg followed the music his entire career. A disc jockey, critic, rock singer, bandleader, and concert promoter, he lived all his childhood dreams—some of which turned into nightmares.

Off My Rocker presents a rollicking, backstage look at the joys and painful realities of a life devoted to music. During his early years as a radio personality, Weissberg basks in the creative glow of the free-spirited, post-Woodstock era but later rebels against the soulless corporate takeover of the music he’s loved forever. Along the way, he detours to the dark side, succumbing to the greed, deceit, theft, and drugs that plague the entertainment industry.

In lively prose and vivid detail, Weissberg shares stories about the eccentric cast of characters who cross his path, including a spectacular array of showbiz legends. Equal parts spicy confessional and pop-culture adventure, with trenchant insights throughout, this page-turner of a memoir will stay with you long after the closing credits.

“I’ve read nearly every music memoir that has been released in the past ten years, and Off My Rocker is in the top five.” — Deborah Speer, Pollstar

“Off My Rocker is a masterpiece of a memoir to be savored by anyone who has ever considered a life in the music business.” — Mark Andes, bassist for Spirit, Jo Jo Gunne, Firefall, and Heart

Kenny Weissberg has been a music junkie since he got his first transistor radio at age seven. Born and raised in New Jersey, he headed west in thousand-mile increments. After graduating from the University of Wisconsin, he spent twelve formative years in Boulder, Colorado, as a radio disc jockey, journalist, and rock ‘n’ roll singer. In 1983, he moved to San Diego, where he produced the internationally acclaimed Humphrey’s Concerts by the Bay series for twenty-three years and hosted the award-winning Music Without Boundaries radio show on five stations. Kenny lives with his wife in San Diego.