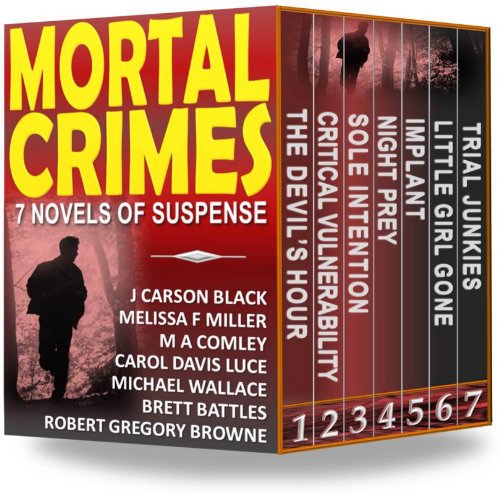 4.9 stars – 19 Reviews
Kindle Price: 99 cents
Text-to-Speech and Lending: Enabled
Don’t have a Kindle? Get yours here.
Here’s the set-up:

550 reviews for the individual books with an overall 4.2 star rating

THE DEVIL’S HOUR (A Laura Cardinal Novel) – J Carson Black
When one of three Arizona girls missing for eleven years turns up alive, Laura Cardinal is called in to work this cold case that warms up fast. After the bones of a second child are found, Laura knows the fiery death of someone close to her isn’t coincidence. The perp is near — and watching.
__________

CRITICAL VULNERABILITY (An Aroostine Higgins Novel) – Melissa F Miller
Everything’s going wrong for Assistant U.S. Attorney Aroostine Higgins. A pretrial motion vanishes from the docketing system. Her apartment catches fire. Routine dental surgery nearly kills her. Someone is out to destroy her — along with the only man she’s ever loved. Now she’s out to find them first.
__________

SOLE INTENTION (Intention Series Book #1) – M A Comley
Ex-cops-turned-missing-persons-investigators Ellen Brazil and Brian Lynx are contracted to find the wife of a bodybuilder. With more women in the Worcester area gone missing, Ellen and Brian suspect a serial kidnapper. If the women are still alive, Ellen and Brian will need to find them — fast.
__________

NIGHT PREY (A Night Series Novel) – Carol Davis Luce
Roberta Paxton had had premonitions of threats before, but this time no one was listening. But deep in the Tahoe forest, emerging only to stalk his prey, a vicious killer watched. Each glimpse of Roberta fired his need, yet still he waited. Until he saw Roberta’s 13-year-old sister, Tobie…
__________

LITTLE GIRL GONE (A Logan Harper Thriller) – Brett Battles
Logan Harper isn’t looking for redemption. But the attempted murder of a friend whose granddaughter goes missing leads to a sinister plot connected to corporate USA. As the odds stack against him, Logan falls back on old skills from the life he’d rather forget to bring the girl home alive.
__________

TRIAL JUNKIES (A Trial Junkies Thriller) – Robert Gregory Browne
A pal from Ethan Hutchinson’s college days is wrongly accused of a brutal murder. When Hutch and his old college gang go searching for the real killer, what they find shatters every notion they have about friendship, loss and redemption … and jeopardizes the lives of Hutch and the woman he loves.