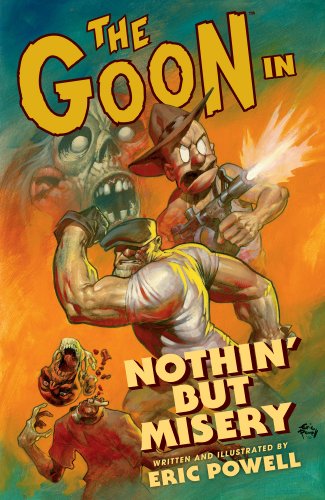 Earlier this week we ran a piece about a Halloween Sale on Graphic Novels currently going on in Amazon’s Kindle book store, but there’s a particular standout that deserves a bit more attention: Eric Powell’s Goon Series. These graphic novels provide a darkly funny, mobland, noir-ish take on the zombie genre.

Horror-comedy is tough nut to crack, but Powell nails it. The running joke, that the Goon’s crime boss Labrazio is so powerful that he can literally crush his foes with his gigantic, supernatural fist at the mere mention of his name, is just as funny and surprising every time it comes up!

Even if you’ve never considered yourself a fan of comics or graphic novels, so long as you love a good laugh, enjoy zombie stories and circa 1930’s – 40’s crime stories, this series is worth a try; download the free samples, and see for yourself.

Every full-color book in the series is currently on sale for $6.99 in Kindle format, which is over 50% off their usual digital list price of $14.99 each. Amazon hasn’t provided an end date for the sale, so the discount prices could expire at any time.

The series is being developed into an animated feature film with David Fincher directing, so you know The Goon is some quality material! This early trailer for the film (no release date has yet been set) gives a very effective thumbnail picture of what the series is all about:

(note – contains cartoon-violent content, but strong language has been censored):

And now, the graphic novels on which the movie is based:

Re-presenting the beginning of Eric Powell’s acclaimed Goon saga, in a new edition with a brand-new cover and design!

The nameless man, the Zombie Priest, has come to town to build a gang from the undead. But even the undead fear the Goon, mob enforcer and protector of the downtrodden residents of Lonely Street. With Powell’s stunning artwork, The Goon’s unique mash-up of horror, mob intrigue, and the sickest sense of humor in comics is an instant classic, and this new edition is the best time ever to find out what you’ve been missing! 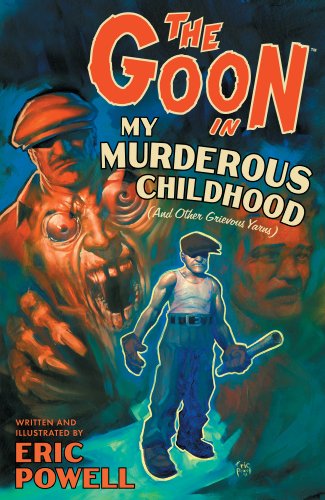 The Goon Volume 2: My Murderous Childhood (and other Grievous Yarns) 2nd Edition (4.5/5 stars)

The Goon’s first Dark Horse adventures are back in a startling new edition, with a gorgeous new cover by Eric Powell and redesigned to match the high-class look of the recent Goon Year paperbacks!

Goon and Franky have been best friends ever since they was tykes.

Find out how the two little ankle biters became best pals, and how they muscled their way into the rackets of big-time crime-boss Labrazio. Plus, stories of zombies, hobos, and pie–crazy skunk apes–horror adventure as you like it!

* Collecting issues #1- #4 of the Dark Horse series, plus the eight-page story from Drawing on Your Nightmares, “The Brothers Mud.”

* All-new cover by Goon creator Eric Powell and an introduction by Frank Cho. 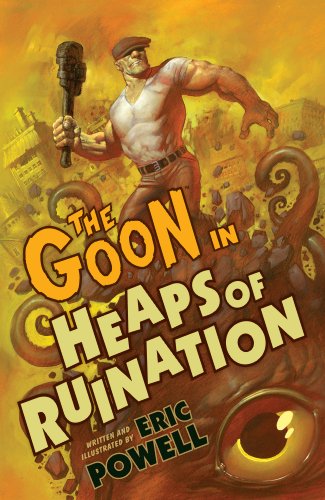 The war with the Zombie Priest heats up in the latest new edition of a classic Goon volume. Taking a cue from the great movie posters of the thirties and forties, this collection features a beautiful new cover by Eric Powell!

The saga of Lonely Street takes turns both tragic and hilarious, as Goon and friends are forced to confront their tragic pasts, a tentacled creature from space and its mediocre Interdimensional-to-English Dictionary menace the docks, and Goon must withstand the coming of El Hombre del Lagarto!

Plus, Mike Mignola cowrites and illustrates an appearance by Hellboy, in one of the strangest crossovers of all time. For those new to The Goon, these editions are a perfect place to start!