Charlotte Tweed and The School for Orphaned Dragons 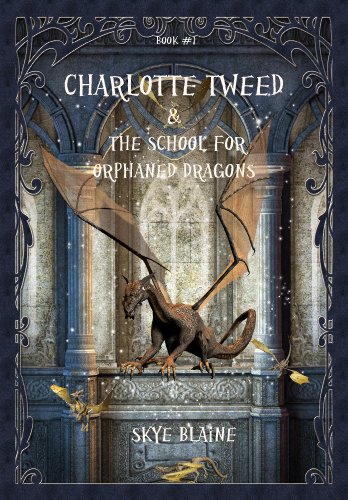 HARLOTTE TWEED & THE SCHOOL FOR ORPHANED DRAGONS (Book #1) tells the story of Charlotte Tweed, a 15 year old orphan who always longed to know who she truly was, where she came from, and who her true parents were. Charlotte goes from one foster home to another, and as she becomes a young teenager, things get worse, and she is thrown out of every home she is sent to. Finally, living with a cruel family and sent to a school where she is bullied, Charlotte ducks off the fire drill line one day and cuts school, taking a walk near the river. It is during this fateful walk that she meets Tom Throtteldon, a wizard from another land. He tells her he’s come to take her home.

At first Charlotte refuses the journey, skeptical of Tom, and instead sticks close to her one new friend, Hannah. But when Charlotte finds herself kicked out again, she has to fend for herself on the streets and in a sleazy rooming house. When Tom Throtteldon appears again, in the pouring rain, Charlotte is ready to go with him.

Magically and mysteriously, Tom Throtteldon takes Charlotte through a hall of mirrors, and they arrive in the land of Annarunnus, the land, she is told, her parents came from. She is led to the famous Bellins School for Magic, where she must train to learn who she is, how to grow strong, and how to use all the powers she doesn’t even know she has.

But before she can get to Bellins, there are dangerous tests Charlotte has to pass, including crossing a crocodile infested swamp and climbing trees that wish to harm her. Tom begins to teach her how to discover the powers within, a long and complex journey.

Once at Bellins, Charlotte discovers that a rare and precious event has taken place: rare dragon eggs have been found, and they hatched just two days before Charlotte’s arrival. Each student receives their own baby dragon to bond with, tame, and train. If they succeed, the student will receive the dragon’s powers, and they will be united for life. If they fail, there will be severe consequences. After all, Bellins is always under attack by the rival school, who keep trying to kidnap the dragons.

At Bellins Charlotte meets wonderful new friends, as she struggles to discover herself and as to bond with her obstinate baby dragon, who does not like her and who she does not like. Charlotte also meets Tyron, one of the handsome Outcasts, and even though dating is forbidden at Bellins, Charlotte sneaks out and has her very first date.

To everyone’s horror, Charlotte and Tyron fall in love. They cross a dangerous line, and if they are caught, they could both be kicked out. But just as Charlotte is risking it all, suddenly, she is summoned back to the place she came from, to help her friend Hannah, who’s in grave danger. Caught between two worlds, Charlotte will be forced to decide just how much she is willing to risk for her love, and for her friends.

Review
“An unforgettable read! This charming novel brings us into another world–of dragons, wizards, spells, schools, and a heroine coming of age. Worthy of Harry Potter, yet with a unique twist and a vivid fantasy universe of its own. I highly recommend it for all ages!” –Morgan Rice, #1 Bestselling author of THE SORCERER’S RING