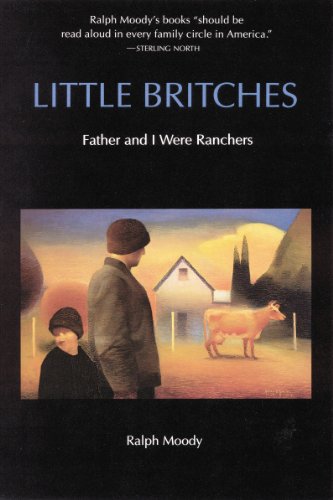 I can remember it like it was yesterday. I had Mr. B for fifth grade. He was very tall, very kind, and a great teacher. But what I will always remember most about Mr. B’s class is Little Britches.

Every day, Mr. B would pick a random time to pick up the book and read us a chapter or two aloud. He never announced it, he never asked us to quiet down first, and he never made an effort to be heard above our ruckus. He would simply open the book to where he’d left off and start to read in his normal tone of voice — but with a slight Southern inflection, to match the setting of the story.

Without fail, in moments we’d be shushing each other and settling into rapt silence, completely absorbed in this simple tale of a boy and his family scratching out a hard living in frontier times. Through every trial and setback (and there were many), it was their love and respect for one another and their rock-solid character that carried them ever onward. I didn’t know it at the time, but this book and the series it launched were true stories about the author’s own youth and upbringing.

Little Britches: Father and I Were Ranchers is the book that set my literary life in motion. I know I’d been reading since first grade, but with the exception of a handful of picture books, I can’t honestly recall the title or story of any book I’d read before having Little Britches read to me by Mr. B.

This book, and Mr. B’s reading of it, turned me into a voracious reader, and a writer as well. Suddenly I realized that books could transport me to other worlds and other times. I understood for the first time that the people and stories in books could touch my heart and make me think. Not only did I want to start reading for pleasure, I wanted to start writing my own stories, too.

Many years later, as an adult and author, I tried and failed to find Little Britches or any of the other books in this series by Ralph Moody in bookstores, either online and in person. It turns out that by the time I went searching for the books they’d been out of print for years. I’d scour the used bookstores from time to time, but never found my beloved Little Britches.

Now, at last, the Little Britches series is back in print. While Little Britches: Father and I Were Ranchers is the only one available in Kindle format thus far, since the paperback editions are selling very well and are very well-reviewed, it’s likely that more Kindle versions are on the way. I certainly hope so. But for now, do your family the favor of picking up Little Britches and starting your own read-aloud tradition. From Amazon:

Little Britches: Father and I Were Ranchers (5/5 stars, currently priced at $9.99)

Ralph Moody was eight years old in 1906 when his family moved from New Hampshire to a Colorado ranch. Through his eyes we experience the pleasures and perils of ranching there early in the twentieth century. Auctions and roundups, family picnics, irrigation wars, tornadoes and wind storms give authentic color to Little Britches. So do adventures, wonderfully told, that equip Ralph to take his father’s place when it becomes necessary.
Little Britches was the literary debut of Ralph Moody, who wrote about the adventures of his family in eight glorious books, all available as Bison Books.

Also note: most of the series is available in Audible audiobook format.