Shark Dash is a very fun game app that kids and adults can both enjoy. It’s priced at just 99 cents, recommended for ages 9 and up, and has an average review rating of 4.5/5 stars across 39 reviews. From Amazon:

It’s a bathtub war between the Sharkee clan and Rubber Duckies, and this tub ain’t big enough for the both of them. Sharkee and his merry band of toy sharks used to get bath time all to themselves, until one day these loud-beaked, dimwitted ducks swam along. Launch the sharks at the ducks in this physics-based game for your Kindle Fire, and stake your claim in bathtub territory for life.

Rubber Ducky, You’re Not the One

These ducks had it coming. They marched in like they owned the place–single file, of course, as arrogant ducks do. As if their taunting and flaunting wasn’t bad enough, they kidnapped Sharkee’s girlfriend, Sally. The bathtub war was officially declared. Join a wild journey to all kinds of bathtubs around the world to save Sally, and dominate the duckies. 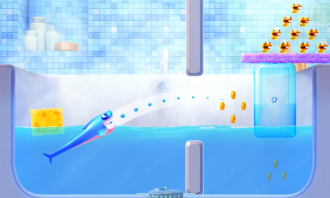 Simply drag and release the sharks’s tail with your finger to launch him at the ducks. Dispose of the duckies and try to grab all of the coins. Finish each level with the fewest jumps possible to earn three stars. Use your stars to unlock new levels. If you’re not happy with your last shot, use the undo option and attempt the ducky demolition again.

The shark clan consists of a rough and rowdy bunch. Sharkee is the fearless hero and leader of the toy sharks. Sawy has a sharp nose–literally. He can cut through chains and send heavy objects crashing down to crush whatever is below. Hammy’s got hops. He can use his Jump Slash skills to leap through the air and hit ducks from incredible trajectories. Scuby is Sharkee’s sneaky twin brother. Calm and meditative, he uses his brain over his brawn. Scuby swims through the watery depths to take out duckies wherever they hide. 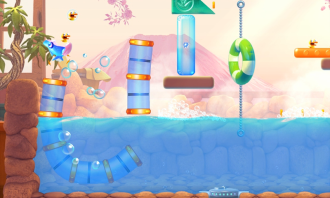 Collect coins to upgrade the appearance of your sharks with cool new skins.

No Bathtub Is the Same

Solve physics-based bathtub puzzles in four different environments and 96 levels. Travel from ancient Rome to distant Japan completing missions and unlocking achievements. Send these ducks for a tail-spin and stop them in their wobbly, webbed tracks.

PLEASE NOTE: This app lets you purchase digital content using actual money. You can configure parental controls for in-app purchases by tapping the Menu icon and then Settings > More.

Very cute graphics. Lots of fun…makes you think a lot about how to make those tricky shots..that can be useful in other games too..enjoyable all around

Shark Dash – get it for 99 cents in the Amazon app store.