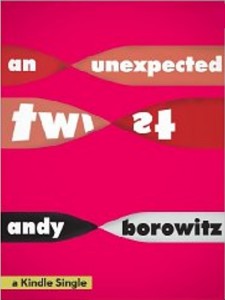 A new month means some new Kindle Singles, 99 cent shorts in fiction, nonfiction, journalism and memoir. Among the best-reviewed titles this month:

An Unexpected Twist, by Andy Borowitz; rated an average of 4.5/5 stars across 141 reviews:

Andy Borowitz almost died, but lived to tell this stranger-than-fiction tale. In his first-ever work of autobiography, the comedian and New York Times bestselling author tells how a freakish medical condition descended upon him one October afternoon and led him to the brink of death – in a New York hospital “consistently rated one of the ten best in the country.” What happens when “one of the funniest people in America” (CBS News Sunday Morning) comes face to face with his own mortality? An Unexpected Twist is in equal parts harrowing and hilarious – and a moving affirmation of what it means to be alive.

My Wife’s Story, a darkly humorous short story by Richard Babcock; rated an average of 4/5 stars across 50 reviews:

In this short fiction with echoes of both O. Henry and Hitchcock, a husband is driven to extremes by the anecdotal story that his wife repeats endlessly. Richard Babcock is the author of two novels and a long-time magazine editor in New York and Chicago.

Blood on the Tracks, by Cecelia Holland; rated an average of 4/5 stars across 26 reviews:

The Great Railroad Strike of 1877 wrenched American history onto a new course. Focusing on events in Baltimore and Pittsburgh, this essay brings this dramatic and bloody confrontation to life, as ordinary people, driven to the wall by oppression, rose against their masters. This was the opening act in long years of savage struggle for the rights of labor that continue to this day.

The Gospel According to Tim, by Joseph Bottum; rated an average of 4/5 stars across 10 reviews:

In the essay-length Kindle Single “The Gospel According to Tim,” Joseph Bottum argues that Tebow strikes a nerve because he has slipped beyond all the usual categories of our wink-and-nudge culture of irony. And he’s done that mostly by being simply who he is: not a football-playing theologian but, in essence, a mystic: “Isn’t that what everyone who has met Tebow does? Believe in him, I mean: believe that he’s for real.”

Don’t Eat Cat, by Jess Walter; rated an average of 5/5 stars across 8 reviews:

In this brilliantly entertaining send-up of zombie lit, Edgar Award winner and National Book Award finalist Jess Walter offers a twist on America’s favorite monster: You don’t have to be dead to be a zombie. Walter creates a postapocalyptic nightmare that is as sidesplitting as it is moving—and all the more damning because it’s so recognizable.
Set in the year 2040, amid rolling epidemics, economic collapses, ozone tumors, genetic piracy, and an Arizona border war, “Don’t Eat Cat” is the story of Owen, a guy who just wants to forget the results of his recent full-body scan with a grande soy latte before going to work in Seattle’s food/finance district. The world has gone straight to hell, and the most horrifying part of it is that not a damn thing has changed: You still have to go to work, you still don’t have a girlfriend, and, unbelievably, the line at the Starbucks Financial still stretches on forever. Why? Because there’s a zombie working behind the counter, an addict of a club drug that causes its users to become aggressive, milk-pale, dead-eyed dimwits with an appetite for rodents and house pets—cats in particular (and, in very, very rare cases, humans).

Also consider the newly-released and promising Kindle Single that hasn’t been available long enough to garner any customer reviews, but is very timely and climbing the sales rank charts at breakneck speed – The Great American Foreclosure Story, by Paul Kiel:

ProPublica’s mesmerizing and groundbreaking look at the national housing crisis, told through the lens of one woman whose story came to exemplify it. Alongside [this homeowner’s] story are additional investigations by ProPublica reporter Paul Kiel and his colleagues Olga Pierce and Cora Currier documenting the systematic failures at banks, mortgage servicers, and government watchdogs that have exacerbated the country’s most severe foreclosure crisis since the Great Depression. Drawing from whistleblower testimonies, extensive homeowner databases, and a trove of underlying data, The Great American Foreclosure Story is a comprehensive and unrivaled look at the housing crisis, and its continuing human toll.