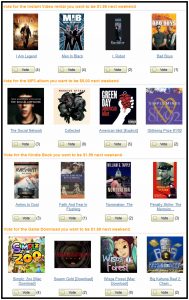 Remember how Amazon had that big holiday promotion, where customers would vote on which sale item they wanted from among a group of deeply-discounted items in various categories? And whichever item won the most votes in each category would be offered at the low, sale price? Well now they’re doing it every week for digital content to be offered at $1.99 ($5 for the MP3 album).

There’s a category for Amazon Instant Videos, another for MP3 albums, one for Kindle books, and one for videogame downloads (Mac or PC versions, not game apps).

Each week’s candidates are posted on Amazon for voting to open on Thursdays, and voting closes the following Wednesday at midnight (PST). The product that has received the most votes in each category is announced on the voting page Friday, and is then offered at the bargain price of $1.99 ($5 for the MP3 album) from the time of the announcement through the end of the weekend.

We’ll be announcing the new video, music and book contenders here each Thursday, and posting the previous week’s winners each Friday. This week:

In Video, Will Smith is featured – I Am Legend, Men In Black, I Robot and Bad Boys.

Happy voting, and may your picks always win!