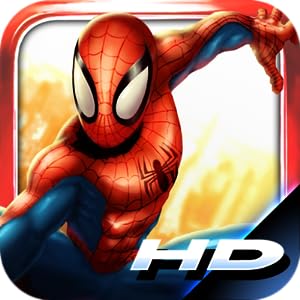 Gameloft brings Peter Parker to your Fire, at a limited time sale price of $1.99 (regularly priced at $6.99)! From Amazon:

Tap into your Super Powers

Your friendly neighborhood Spider-Man battles to save his beloved city! Spider-Man will need to use all of his great powers to save New York from the worst breakout of Super Villains the city has ever seen. Fight against time to stop the madness and mayhem created by the Super Villains who want to take over the city and disperse a poisonous virus! 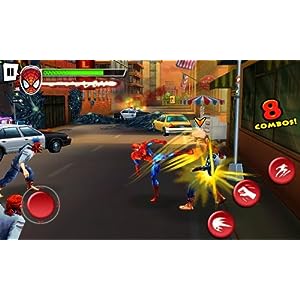 Spider-Man: Total Mayhem HD (Kindle Fire Edition) captures all the action, humor, and fun of the Ultimate series in state-of-the-art gameplay and animations. Jam-packed with features, the game offers settings to display tips during gameplay as well as to adjust the control’s sensitivity and sound volume. When you are ready to join the ranks of super heroes, select your preferred difficulty level: Easy, Normal, Hard, or Ultimate, which can be unlocked by completing the game in any other level. There are other fun extras you can unlock as you play along.

Are you up for the challenge?

The game carries an average rating of 4/5 stars across 34 customer reviews, and is recommended for ages 9 and up. Amazon Vine Voice reviewer Scott Asher says:

Playstation 1 Spidey on your tablet!

I’m a fan of adventure games and a fan of Spider-Man so picking this up was an obvious choice. It turns out to be a great decision.

Playing as Spider-Man is a blast. You can swing around, jump, dive, punch and do other special attacks. When someone is coming behind as a sneak attack you get a Spidey-Sense notification and if you press the screen in the right place Spidey dives out of the way. The button mashing is enjoyable and rewarding. The game can get really difficult at times with boss battles, though.

Overall, a really solid game for tablets and one of the better adventure type games available now.

If you’re a fan of superhero action games, grab this one while it’s on sale.