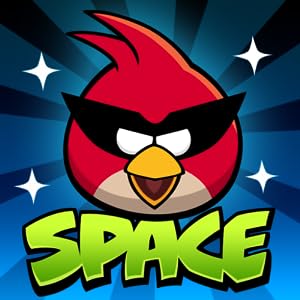 Angry Birds: Space has only been available in Amazon’s App Store for one day, and it’s already accumulated an average review rating of 4/5 stars across 69 customer reviews!

Blast off into the final frontier with your favorite avian avengers! The Angry Birds are back, and this time even the Earth can’t contain their fury.

Angry Birds Space, the all-new adventure from Rovio, takes you to straight to the cosmos, where the feathers continue to fly. This time, the familiar physics-based gameplay of the original Angry Birds games comes with a NASA-style twist: the birds’ slingshot trajectories are affected by different gravitational fields as they navigate planets, black holes, stars, and more.

Angry Birds Space features 60 interstellar levels on celestial bodies and in zero gravity, resulting in spectacular gameplay ranging from slow-motion puzzles to lightspeed destruction. With regular free updates, brand-new birds, brand-new superpowers, and a whole galaxy to explore, the sky is no longer the limit! 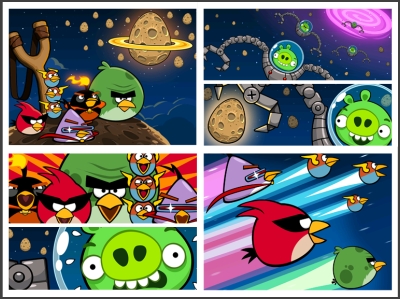 Where No Angry Bird Has Gone Before

The Angry Birds have achieved a lot in the last two years, but apparently peace on Earth wasn’t good enough. The evil pigs have taken the fight to outer space, and the Angry Birds are right on their curly tails.

After a giant claw kidnaps their eggs, the Angry Birds chase it into a wormhole and find themselves floating in a strange new galaxy–surrounded by space pigs. Luckily for our feathered friends, a funny thing happened when the Angry Birds passed through this cosmic portal: they emerged with amazing super powers of their own.

Now the birds and pigs are locked in a fierce intergalactic battle, fighting on and above rocky asteroids, icy planets, forbidding black holes, and much more. The Angry Birds have brought along their handy, enormous slingshot, of course; but the outer-space environment creates new, unpredictable flight conditions. No longer can they just rear back, fire, and hope for the best.

Think you’re up to the challenge? Get Angry Birds: Space now!

Note: While this game is also available in a free, ad-supported version, we here at Kindle Fire on Kindle Nation Daily will no longer be recommending ad-supported versions because we’ve found they actually cost more than the paid versions due to their excessive drain on your Fire’s rechargeable battery. We will continue to look for, and recommend, quality, free games and apps that are not ad-supported.

Initiate - The Unfinished Song Book 1: (Young Adult Epic Fantasy)
Dindi yearns to dance. But will her tribe allow it? Dancing is forbidden... ...except for those who pass the secret rites of Initiation. Because dancing creates magic. And magic is dangerous. But not as dangerous as the lithe and lethal Warrior-Dancer who saved her life. He’s the son of the Last Fae. He’s forbidden. He’s an exile. And War and Death radiate from him like the colors in his aura. Will she pass the Initiation? What if the...
Initiate - The Unfinished Song Book 1: (Young Adult Epic Fantasy)
by Tara Maya
is a sponsored collaboration between
BookLending.com and Kindle Nation Daily.
For more information, click here.