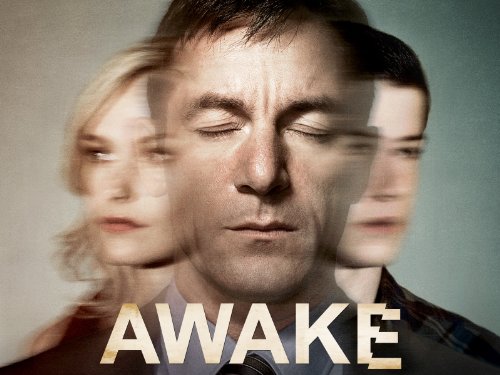 Remember Draco Malfoy’s evil, self-serving father from the Harry Potter films? Jason Isaacs, the excellent actor who imbued that role with such loathsome superiority, is now starring in an unusual, almost experimental new television series called Awake. The concept behind the show is, what if you couldn’t tell the difference between dreams and reality? From IMDB:

After a car accident takes the life of a family member, a police detective lives two alternating parallel lives, one with his wife and one with his son. Is one of his “realities” merely a dream?

When the detective “wakes” following a car accident, he finds his life split into two realities. In one, his wife survived the crash but his son did not. In the other, his son survived but his wife was killed. In both, he’s still a dedicated police detective—though with different work partners—, and still loves his wife and son very much. He switches between the two realities when he wakes from sleep.

As he goes about his life/lives, doing his detective work, seeing a therapist to recover from the crash (again, a different person in each reality), he finds himself hoping never to learn the truth: is one of his lives is the real one, or are both just a dream?

This is a very well-written and well-acted show, hailed by critics and other viewers as unlike anything they’ve seen on TV before. Amazon Hall of Fame reviewer Grady Harp says:

Since the season of DOWNTON ABBEY is over for the year it is refreshing to come upon an intelligent new series that is fresh, fascinating, well acted and takes a new stance on not only law enforcement but character development and the more serious questions of what happens to the person left behind after a tragic accident.

With the first three episodes now available for rent on Amazon, why not get caught up on the series and then continue watching it on NBC?