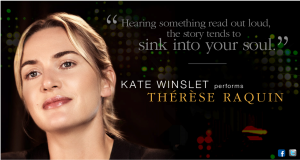 Audible has invited some of Hollywood’s most celebrated actors to lend their voice talents to new releases of some beloved classic novels.

Anne Hathaway was selected to narrate the children’s literature staple The Wonderful Wizard of Oz. Hathaway had this to say about the experience:

“It’s such a wonderful book and I was so happy to be a part of bringing it to life,” Ms. Hathaway said. “There are a lot of great voices in it. The more fun you have with it, the sillier and the more free you get with it, the better it is because it’s a story that can handle it. It’s amazing to be able to discover something new about something you feel you know so well.”

Kate Winslet was tapped to give voice to Therese Raquin. If you’ve never heard of this novel, it’s somewhat similar to one with which you’re probably more familiar: Bronte’s Wuthering Heights. Here’s a brief description from Audible:

Therese Raquin is the story of a young woman forced into an unhappy marriage to her dull, sickly cousin and smothered by her overbearing aunt.  When her husband’s childhood friend enters her life, it leads to a torrid affair that sets her spirit free for the first time, but with shattering consequences.  Steeped in the atmosphere of 19th-century France and with a darkly rich foreboding, it is a story that brings out the best of its narrator’s incomparable talents.

Next up is the incomparable Samuel L. Jackson, who performs the crime fiction masterpiece A Rage in Harlem, by Chester Himes. From Audible:

Himes, described by The Sunday Times as “the greatest find in American crime fiction since Raymond Chandler”, was no stranger to the world of crime: in his late teens and early 20s, he served 7 years in the Ohio State Penitentiary for armed robbery, the confession to which was beaten out of him by the police. He delivers the tale of his hopelessly naïve hero suddenly finding himself on the run from a hypocritical and far-from-heroic police force with lurid violence and brutal humor. There is no voice better than Mr. Jackson’s to narrate this hardboiled story of love and crime, set in a richly imagined, mid-20th century Harlem.

Finally there’s Susan Sarandon, who reads The Member of the Wedding. From Audible:

The best way to experience this classic of the American South is by joining five-time Academy Award nominee and Best Actress winner Susan Sarandon (Dead Man Walking, Thelma & Louise) as she guides the listener on a journey through the anguish of adolescence and isolation.

“Rarely has emotional turbulence been so delicately conveyed,” said The New York Times of Carson McCullers’ sensitive portrayal of Frankie Addams, a disconnected 12-year-old whose only friends are her family’s maid and a six-year-old cousin. Desperate to be part of something big, she takes an overlarge interest in her brother’s wedding and dreams of following the couple on their honeymoon to the Alaskan wilderness. But as Frankie crosses into adulthood, she experiences the fantasy-shattering disillusionment that must come with it. This is a story for anybody who’s ever felt like an outsider and a natural fit for Ms. Sarandon, a master at creating authentic, sympathetic characters.

Let’s all hope these are just the first in a larger series of A-List Audiobooks!