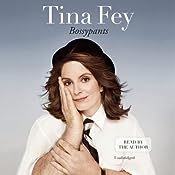 Looking for some good listens from showbiz folk that are actually well-written, insightful and funny? Look no further than these celebrity memoirs, all narrated by the authors and all personally recommended by Kindle Fire on Kindle Nation Daily Editor in Chief April L. Hamilton.

Before Liz Lemon, before “Weekend Update”, before “Sarah Palin”, Tina Fey was just a young girl with a dream: a recurring stress dream that she was being chased through a local airport by her middle-school gym teacher. She also had a dream that one day she would be a comedian on TV.

She has seen both of those dreams come true.

At last, Tina Fey’s story can be told. From her youthful days as a vicious nerd to her tour of duty on Saturday Night Live; from her passionately halfhearted pursuit of physical beauty to her life as a mother eating things off the floor; from her one-sided college romance to her nearly fatal honeymoon – from the beginning of this paragraph to this final sentence.

Tina Fey reveals all, and proves what we’ve all suspected: you’re no one until someone calls you bossy.

PLEASE NOTE: When you purchase this title, the accompanying reference material will be available in your My Library section along with the audio.

Another celebrity memoir that will surprise you with its self-deprecation, frankness, humor, wisdom and depth is Rob Lowe’s Stories I Only Tell My Friends, rated 4.5/5 stars across more than 1300 reviews. If you’ve always thought of Lowe as little more than a good-natured heartthrob, you’re in for a big surprise here. From Audible: 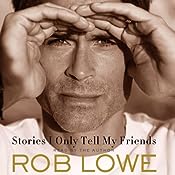 Prepare to be amazed by the many ways this book and its author are better than you thought they would be. Everybody knows that Rob Lowe is very handsome, and that he spent a long time being a Hollywood wild child. Now in his 40s, Lowe’s reflections on his life thus far demonstrate a remarkably responsible perspective and a refreshingly self-deprecating look at how he ended up in the better state of mind he inhabits today. While the headlines and high notes may come and go, Lowe remains a devoted husband and proud father.

This listen is a small miracle for many reasons. It’s not simply the fact that Lowe reveals himself as capable of compelling writing, which he certainly does. It’s also not merely the path of the narrative that’s intriguing, though that’s definitely the case. Whether he is spending several chapters thoroughly reminiscing about the many lessons he learned during The Outsiders or sharing a quick anecdote about trying to meet Liza Minnelli when he was a little kid, Lowe indeed offers up a terrific set of insights about both life and stardom. He proves himself as a generous spirit, with strong thanks for Martin Sheen and solid praise for Patrick Swayze.

His narration is clearly heartfelt, and never comes across as phony or acted. This listen feels like a casual dinner conversation, minus the slick descent into rumor-mongering that usually rears its ugly head in memoirs of this variety. Lowe manages to steer clear of the blame game when analyzing the simultaneous blessing and curse of the Brat Pack label or his decision to leave The West Wing, and even finds some gracious adjectives for Tom Cruise. Be on the lookout for eerily spot-on impersonations of many stars, including a particularly good Christopher Walken and Matt Dillon.

Fans of the caustic, clever Denis Leary should not miss his hilarious Why We Suck, rated 4/5 stars across over 300 reviews. Filled with his no-nonsense take on everything from Irish-American cuisine to parenting, religion, celebrity, political correctness and anything else on which he has an opinion (which is just about everything), this audiobook is a lot like listening to an extended Leary standup routine. From Audible: 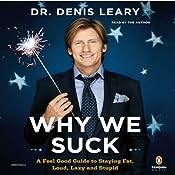 “A pissed off Leary is the best Leary,” says one critic of the writer and comic. In Why We Suck, Dr. Denis Leary uses his common sense and his biting and hilarious take on the world to attack the politically correct, the hypocritical, the obese, the thin – basically everyone who takes themselves too seriously. He does so with the extra oomph of a doctorate bestowed upon him by his alma mater Emerson College.

“Sure it’s just a celebrity type of thing – they only gave it to me because I’m famous.” Leary explains. “But it’s legal and it means I get to say I’m a doctor – just like Dr. Phil.”

In Why We Suck, Leary’s famously smart style and sardonic wit have found their fullest and fiercest expression yet. Zeroing in on the ridiculous wherever he finds it, Leary unravels his Irish Catholic upbringing, the folly of celebrity, the pressures of family life, and the great hypocrisy of politics with the same bright, savage, and profane insight he brought to his critically acclaimed one-man shows No Cure for Cancer and Lock ‘n Load, and his platinum-selling song, A**hole.

Proudly Irish American, defiantly working class, with a reserve of compassion for the underdog and the overlooked, Leary delivers blistering diatribes that are penetrating social commentary with no holds barred. Leary’s work will find wide appeal among people who want to laugh out loud or find a guide who matches their view of what’s wrong in America and the world-at-large; and fans of his one-man shows, his many movies, and Rescue Me, Leary’s Golden Globe and Emmy – nominated television show. Why We Suckis the latest salvo from one of America’s most original and biting comic satirists.