Twenty Flowers of Evil: A Spiritual Story in Paris of the 1920s 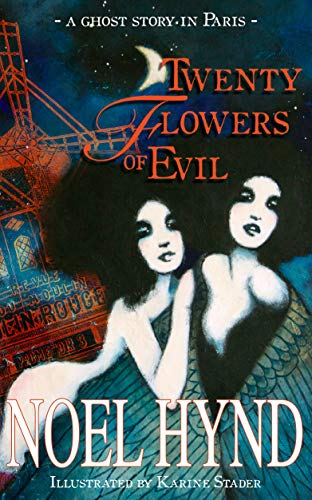 – Learn More
Text-to-Speech and Lending: Enabled
Available on Audible
See more titles by Noel Hynd
Here’s the set-up:
Paris in the 1920’s, a time of jazz, flappers, fast money, vibrant clubs and the excesses of life for those who survived World War One. Montparnasse in that era: the quarter of Paris that was home to Hemingway and Fitzgerald, Gertrude Stein, James Joyce, Picasso, Man Ray, and countless other creative souls from all over the world. They drank, they partied, they created and they hung out at famous cafes like Le Coupole, La Rotonde and Le Select.

But there was also a dark spiritual undertone to the city during The Roaring Twenties (or as the French called it, ‘Les Annees Folles.’ This was a time of, gangsters, wounded ex-soldiers and angry spirits…..

Audrey Hamilton is a young American woman who comes to Paris in the mid-1920’s to paint and fulfill her artistic dreams. But darkness and terror await her in the profane disturbed spirit of Charles Baudelaire, the masterful poet of the 19th Century masterpiece ‘Les Fleurs du Mal.’ The long dead poet reaches out to Audrey from his grave the grave in the brooding Cemetery of Montparnasse.

TWENTY FLOWERS OF EVIL is a wonderful historical novel as well as a literary novel. Even more intriguing, it is a frightening ghost story as well as an ode to the Paris of the 1920’s. Lavishly illustrated with rare photographs and new art, it is a novel, an art exhibition, a trip back in time and a dark love letter to the city of Paris and a special time in the 20th Century.
Lavishly illustrated with original art and rare photographs of the era.

“Twenty Flowers of Evil” is another stunning ghost story by NOEL HYND, author of ‘Ghosts,’ ‘Cemetery of Angels’ and USA Best Seller ‘A Room For The Dead.’

Making this edition even more memorable are the original illustrations of French Artist, KARINE STADER, whose work has been shown in galleries across Europe and the US. This is her print and Kindle debut.

Net Worth
Mason Hill wants one thing: revenge. When Charlotte walks into his office, all innocence and desperation, he knows the perfect way to get it. He makes a dark bargain. She’ll give him her body to save her family. Little does she know he plans to ruin both. Charlotte Van Kempt will do anything to keep her family afloat. Even if it means signing a contract with a mysterious billionaire. Except he has secrets that unravel in front of her. He has...
Net Worth
by Amelia Wilde
is a sponsored collaboration between
BookLending.com and Kindle Nation Daily.
For more information, click here.

The Devil's Heart: A Nick Randall Novel
In a remote section of Argentinian jungle, an archeological team searching for an ancient, mysterious relic vanishes without a trace. With nowhere else to turn, a colleague seeks the help of archeologist Nick Randall and his daughter Samantha to help find the missing team…and the relic. Randall and Sam travel through miles of jungle searching for the missing scientists, but soon find themselves in a nightmare of unimaginable terror. The...
The Devil's Heart: A Nick Randall Novel
by Robert Rapoza
is a sponsored collaboration between
BookLending.com and Kindle Nation Daily.
For more information, click here.