Of Myth and Shadow 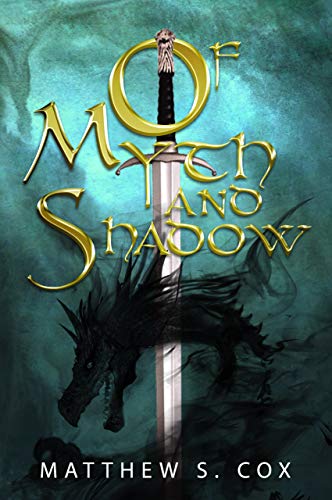 – Learn More
Text-to-Speech and Lending: Enabled
Enjoy Matthew S. Cox Books? Tell us why and WIN a chance for a FREE ebook!
Here’s the set-up:

Aegaan is a vast and righteous kingdom, yet darkness gathers in the distant corners of the realm. Elven raids on small towns have inflamed racial tensions with humans, pushing distrust to hatred and the brink of war.

Anrael wanders the woods alone until a chance meeting tempts him to set aside his contempt for those who scorn his half-elven blood.

When Kylie, a naive elf terrified of humans, is thrust among them against her will, she begins to question her mother’s tales of dread.

Having lost everything dear to him, the bandit king Jhelan lives only to seek challenge in battle… until he finds himself willing to die protecting that which he hates the most.

The diabolical mystique of the dark elves cloaks L’an Thal’Sara in protection, but the cruelest lie she tells is to herself.

Thaelwyn, a virtuous knight, sets out to discover the source of the Elves’ aggression, but faces a much greater test within his mind.

Beneath the chaos, minions of the Destroyer search for their promised leader, a child possessing power beyond their years. If the innocent falls to darkness, a kingdom rife with hatred will surely crumble.