How To Date A Tomboy Box Set (Books 1-3): Sweet YA Sports Romance 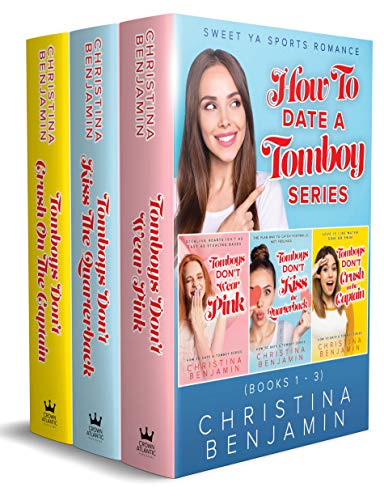 – Learn More
Enjoy Christina Benjamin Books? Tell us why and WIN a chance for a FREE ebook!
Here’s the set-up:

Tomboy Casey Beeler is used to being a loner. But one viral video gives her more than she bargains for, including a chance to start the softball team she’s always wanted. In love and sports, timing is everything. If Casey doesn’t do what it takes to get her softball team off the ground now, she may not get another chance. The only problem . . . it could cost her the one thing she loves more than sports—Lucas Hargrove.

Lucas Hargrove seems to have it all, money, looks, baseball, Harvard. But looks can be deceiving. The pressure of living up to his perfect image is getting to him. He doesn’t even know if he wants to go to Harvard. The only thing he does know is that he can’t fight his feelings for Casey Beeler any longer, no matter what his parents say. But who gives up Harvard for a girl they’ve only kissed once?

Casey attempts to navigate high school mean girls, homecoming dates and her new softball team, all while pursuing her long-time crush. But stealing hearts isn’t as easy as stealing bases.

Can these two star-crossed lovers find their way, or will they have to choose between love and the sports they love?

BOOK 2: Tomboys Don’t Kiss The Quarterback
The plan was to catch footballs, not feelings.

Marissa wants to catch the eye of her fellow soccer star crush.
Archer wants to save face after being dumped.
A fake relationship gives them both what they want.

The tomboy gets popularity. The quarterback gets privacy.
The plan is perfect.
Until the lines they’ve drawn begin to blur.

While mending his broken heart, Archer begins to realize that Marissa is everything that’s missing from his life. But how can he convince her his fake feelings have turned real?

Archer’s good at throwing footballs, not throwing his heart on the line.
Falling in love with his fake girlfriend was never part of the plan.
But if he doesn’t tell her how he feels, it could cost him more than just the big game.

BOOK 3: Tomboys Don’t Crush On The Captain
Love is like water. Sink or swim.

Tomboy Nicole Fraser is used to crushing her competition.
Crushing on them?
That’s a different story.

Her passion has always been soccer,
but when she gets roped into joining her brother’s crew team,
her connection with crew captain, Ian Cruz, is undeniable.

The problem?
He’s the boy next door and her brother’s best friend.
Which means he’s strictly off-limits.

Pursuing a secret relationship with Ian would destroy her brother.
Will she listen to her head or her heart?
The wrong decision could cost her someone she loves.