The Secret to Everything: How to Live More and Suffer Less 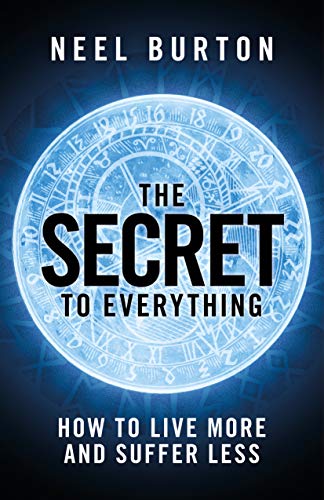 – Learn More
Text-to-Speech and Lending: Enabled
Available on Audible
Enjoy Neel Burton Books? Tell us why and WIN a chance for a FREE ebook!
Here’s the set-up:

Self-help, with a twist

The Secret to Everything has been known to mystics and scholars for centuries and millennia, and, today, is increasingly being confirmed by both philosophy and science. Socrates certainly knew it, as did the Buddha, and more recently, Albert Einstein, Carl Jung, and Emily Dickinson. It is a secret not because it is hidden as such, but because it is so difficult to see, running counter to so many of our most basic assumptions.

Each of the book’s ten chapters exposes a particular aspect and practical application of the secret, while also keeping it carefully under wraps. On the surface, the chapters may seem to have little in common, but they are all built around the same wisdom. Your challenge, as you read, is to find the common thread that runs through all the chapters. The secret is discussed at the end, but don’t peek or you’ll spoil the fun.

★★★★★ [Neel Burton] draws from religion, philosophy, art, and science… Now, don’t misunderstand me: this doesn’t feel like reading a heavy text. It isn’t like that at all, it’s highly accessible while still being thought-provoking. Each chapter ends with practical steps about how to incorporate the chapter’s theme into your life. Hint: If you notice the parallels between the action points in each chapter, you will clue in on the Secret. And no, I won’t be revealing that here. You need to read the book! —Jamie Bee, Amazon.com Top 50 Reviewer

Dr Neel Burton is a psychiatrist, philosopher, and wine-lover who lives and teaches in Oxford, England. He is a Fellow of Green-Templeton College in the University of Oxford, and the recipient of the Society of Authors’ Richard Asher Prize, the British Medical Association’s Young Authors’ Award, the Medical Journalists’ Association Open Book Award, and a Best in the World Gourmand Award. His work has featured in the likes of Aeon, the Spectator, and the Times, and been translated into several languages.

3. How to be religious

5. How to be fearless

The Secret to Everything