From The Guardian: The final collection of early stories from the late Terry Pratchett, written while the Discworld creator was a young reporter, will be published in September… Support our news coverage by subscribing to our Kindle Nation Daily Digest. Joining is free! 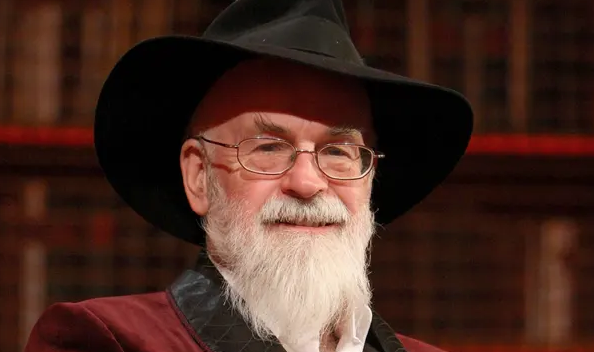 The tales in The Time-travelling Caveman, many of them never released in book form before, range from a steam-powered rocket’s flight to Mars to a Welsh shepherd’s discovery of the resting place of King Arthur. “Bedwyr was the handsomest of all the shepherds, and his dog, Bedwetter, the finest sheepdog in all Wales,” writes the young Pratchett, with typical flourish. The stories appeared in the Bucks Free Press and Western Daily Press in the 60s and early 70s.

Terry Pratchett left school at 17, in 1965, to work at the Bucks Free Press, writing a weekly Children’s Circle story column as part of his new job. He published his first novel, The Carpet People, in 1971, when he was only 23. Editions of the newspapers containing the stories sell for hundreds of pounds online. Dragons at Crumbling Castle, a first collection of the stories, was published in 2014.

Ruth Knowles and Tom Rawlinson, the editors of Pratchett’s children’s books, said when they learned from the author’s longtime agent, Colin Smythe, that there were more early stories, they jumped on them.

“After reading them, we knew we had to create one final book. It is very fitting that some of the first stories he wrote will be in the last collection by him to be published,” said Knowles and Rawlinson in a statement. “There is so much in these stories that shows you the germ of an idea, which would go on to become a fully fledged Terry Pratchett novel, and so much hilarity that we know kids will love. That is what makes the stories so special – they are for kids and adults, and kids who want to be adults, and adults who are still really kids. Which is exactly who a Terry Pratchett book should be for.”