The Shadow Order – Books 1 – 8 (The complete series): A Space Opera 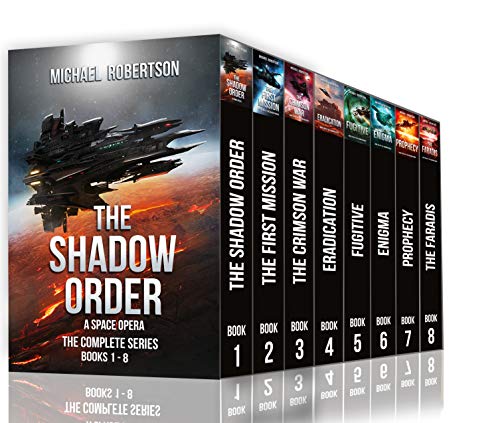 4.1 stars – 82 reviews
Kindle Price: 99 cents
Everyday Price:
Text-to-Speech and Lending: Enabled
See more titles by Michael Robertson
Here’s the set-up:
If there’s a problem in the galaxy no one else can fix, the Shadow Order get a call.

A team pulled together because of their individual talents, the Shadow Order have little time for rest as they embark on one dangerous mission after the next, fighting volatile creatures on hostile planets.

Although when their goals begin to clash with their morals, they start asking questions.

Who are they really working for?

What’s the link between the seemingly unrelated missions?

Are they the bad guys?

Do they even want to know?

Download – The Shadow Order – The Complete Series – today to join Seb Zodo and his team in a fast-paced planet-hopping space opera saga. Travel with them to distant worlds inhabited by a wide range of volatile species as they move from one war to the next, pulling societies back from the brink. And maybe find out how it’s all connected and if it was all worth it?

Praise for The Shadow Order:

5 stars – If you like your space operas fast paced and filled with action this is a series for you. It will keep you turning pages while wondering what else could go wrong to complicate a mission. – Amazon Reviewer.

5 stars – Not your average Space Opera. There’s nothing straight forward here and it has enough twists and turns to almost make you dizzy. The character development is outstanding. – Amazon Reviewer.

5 stars – Absolutely phenomenal series. The lack of sleep I got from binging these books is 100% worth it. Do yourselves a favour and read this series! – Amazon Reviewer.