Vaquita: Science, Politics, and Crime in the Sea of Cortez 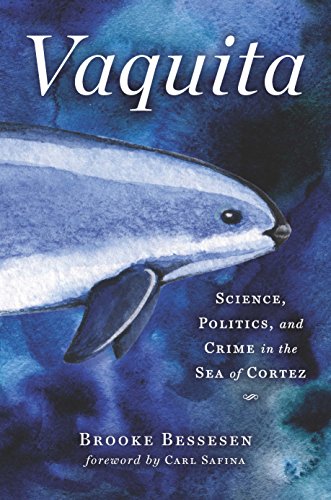 “Gripping…a well-told and moving tale of environmentalism and conservation.” —Kirkus

In 2006, vaquita, a diminutive porpoise making its home in the Upper Gulf of California, inherited the dubious title of world’s most endangered marine mammal. Nicknamed “panda of the sea” for their small size and beguiling facial markings, vaquitas have been in decline for decades, dying by the hundreds in gillnets intended for commercially valuable fish, as well as for an endangered fish called totoaba. When international crime cartels discovered a lucrative trade in the swim bladders of totoaba, illegal gillnetting went rampant, and now the lives of the few remaining vaquitas hang in the balance.

Author Brooke Bessesen takes us on a journey to Mexico’s Upper Gulf region to uncover the story. She interviewed townspeople, fishermen, scientists, and activists, teasing apart a complex story filled with villains and heroes, a story whose outcome is unclear. When diplomatic and political efforts to save the little porpoise failed, Bessesen followed a team of veterinary experts in a binational effort to capture the last remaining vaquitas and breed them in captivity—the best hope for their survival. In this fast-paced, soul-searing tale, she learned that there are no easy answers when extinction is profitable.

Whether the rescue attempt succeeds or fails, the world must ask itself hard questions. When vaquita and the totoaba are gone, the black market will turn to the next vulnerable species. What will we do then?